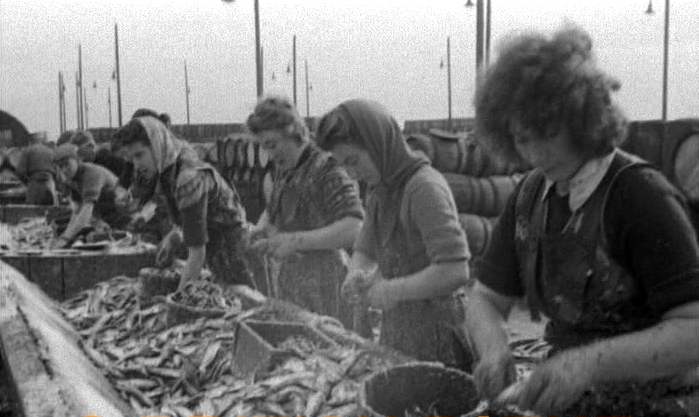 A time of plenty -
Great Yarmouth 1948, fisher-girls sort out the herring catch

I have been sent this article by a member of the Party. It makes a lot of good sense to me (although I would talk more about English than British!) Here is the article - what do you think?

How the politicians betrayed Britain's fishermen

'Twas down where fisher-folk gather,
I wandered far from the throng,
I heard a fisher-girl singing,
And this refrain was her song .......

This is the first verse, rarely heard nowadays, of the popular song - Red Sails in the Sunset. Lyrics by Jimmy Kennedy, music by Hugh Williams - 1935

When Edward Heath took Britain into the European Union in 1973, unscrupulous Tory politicians handed over Britain’s once proud fishing industry to Brussels on a plate. The Common Fisheries Policy devised by the EU, is responsible for the destruction of Britain’s fishing industry, with the loss of thousands of jobs and billions of pounds in revenue.

Background
Britain, as you would expect of an island nation, has a fishing heritage that goes back generations. By 1970, the fishing industries of England and Scotland were among the finest in the world, in technology, efficiency, and quality of produce. Britain was producing over a million tons of fish a year, and was preparing to claim its international right to the resources of a 200 mile Exclusive Economic Zone (EEZ) around the British Isles. This was the new law of the sea agreed by the UN in 1973.

In 1970, a rise in white fish prices and a resurgence in herring fishing was boosting the prosperity of fishermen and fishing ports. The country’s fishery future looked secure. Then came Britain’s entry into the then European Common Market in 1973, negotiated by Edward Heath.

Betrayal
Hours before Britain was to be admitted, the original six members drafted the notorious addition to the “Acquis Communautaire”. It obliged new members to surrender the control of their waters to Europe, and to agree to “equal access to a common resource” as far as fish was concerned. All new applicants for membership would have to accept the condition, and that has been the case ever since. Despite a stream of subsequent lies and deception that this was not really the case, the government had sold the fishing industry like a pawn to gain entry to Europe. The European Commission then assumed the authority to delegate shares of the fishery resource to member states.

Apart from Ireland, and the existing European maritime states that had nothing to lose and everything to gain, Britain was the only nation in the world to give up that sovereign right to its exclusive 200 mile fishing zone, and accept the principle of ‘equal access' which was made a condition for all EU members.

Years later, Spain’s full entry into the EU Common Fisheries Policy nearly doubled the size of the EU states fishing fleets, and the later entry of the Baltic states increased the size still further. The size of the English and Scottish fleets had to be seriously reduced to accommodate the others.

What had taken British seamen and merchants 300 years to develop, was systematically reduced and destroyed by the EU Common Fisheries Policy in the 35 years from 1975 when measures started to be applied. No other nation in the history of the world has given up its fishing industry to foreign interests like Britain has done. 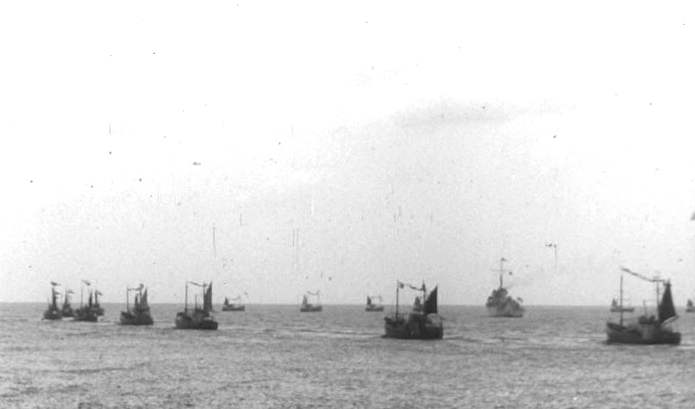 No state outside the EU has surrendered its 200 mile exclusive fishing zone to another body. Today, the vessels that reap the benefits of the UK marine EEZ are fleets from Spain, France, Denmark, Holland, and the new EU member states of Poland, Latvia, Lithuania and Estonia. In consequence, much of the fish purchased by British housewives, though caught in British waters, are from Continental fishing vessels.

The EU's Common Fisheries Policy imposes a regime of equal access for vessels from all member states in the EU's exclusive fishing zone, 200 nautical miles from its coastline.

Within this zone, member states have a 12-mile zone around their own coastlines within which their own fishing vessels have exclusive rights.

In other words, because Britain is a member of the EU our 200 mile exclusive fishing zone around the British Isles has been reduced to just 12 miles by Brussels bureaucrats. The North Sea, which once ranked amongst the richest waters in the world was, before we joined the EU, Britain’s national fishing waters.

The EU common fisheries policy has created a situation where landlocked nations like Austria have a say in how many fish a seafaring nation like Britain are allowed to catch.

The EU Quota System
Each country in the EU is given a quota of how many tons of fish they are allowed to catch. Each fishing vessel is then handed an individual fishing quota for different types of fish based on scientific data on the health of fish stocks. This leads to millions of tons of fish being wasted every year.

A trawler, for example, may have been given a quota to land 10 tons of cod and 10 tons of haddock. A problem arises when one of those quotas is met but not the other. A trawler that has landed all the cod it is allowed to catch but only half of the haddock, will continue to fish in order to meet its haddock quota. This means any extra cod caught in pursuit of its haddock quota will have to be thrown back into the sea, dead. This damages fish stocks and wastes millions of tons of fish. Catches and landings must be recorded. If a fisherman brings home more than his quota he faces a huge fine. 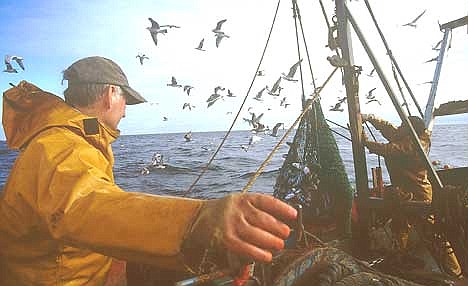 Surplus fish are thrown back into the sea, dead

Non-EU countries like Iceland have retained booming fishing industries and healthy fish stocks by keeping out competitors, like the Spanish, in a way that membership of the EU’s Fisheries Policy makes impossible.

Conclusion
Devious politicians regarded Britain's fishing industry as small beer, and a pawn well worth sacrificing for other benefits they imagined the European Union would bring.

Since no Parliament can bind its successor, both Labour and the Tories are equally to blame for the sorry mess the fishing industry finds itself in at the present time. But there is no need for us to remain under such grovelling humiliating servitude, since under the democratic principles of our historic constitution we can end the shameful surrender of our fishing grounds, our fishing rights and fish stocks, at any time of our choosing.

Thirty five years of senseless destruction is enough.
The English Democrats will take England out of the EU and re-establish control of our 200-mile exclusive fishing zone. We will then be able to rebuild our fishing industry and ensure the proper environmental management of fish stocks.
Posted by Robin Tilbrook at 19:24