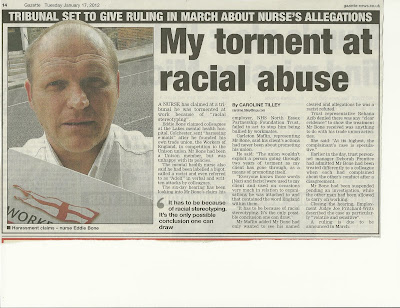 I suspect that Eddie Bone will win his case, not least because the North Essex NHS Trust’s “Head of Human Resources” admitted, in the witness box, that she thought that the English were not a recognised racial group under the Equalities Act! Idiotic big mistake!

She was told off by the Judge who said:- “Of course the English are covered! Just like the Scottish, Irish, Welsh and Congolese!” The Judge then sent her out to consider the error of what she had just said.

However, whatever the outcome of this case, it does show that the Workers of England Union are a serious Union willing to fight tooth and nail for their members and are truly worthy to be recommended. Personally I do recommend this Union wholeheartedly.