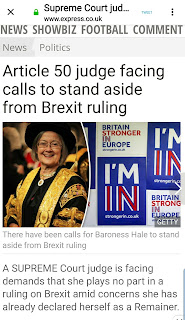 Many lawyers and constitutional commentators have pointed out that Lady Hale, the President of the Supreme Court, who delivered the Judgment in the proroguing of Parliament case, and her colleagues in the Supreme Court, invented a completely new basis on which “Proceedings in Parliament” would be dealt with by the courts.  They completely ignored the legally and constitutionally correctly traditional Judgment of the High Court.

I thought however that it was worth highlighting Lady Hale’s comments that were reported approvingly in the Sunday Times on September 29th under the headline of “Take the right partner to be supreme at law” by Nicholas Hellen.  He writes about Lady Hale and her political views from a speech that she made at the launch of “Cambridge Women in Law” in which he says that she “spent an hour dispensing her thoughts on how women can succeed in the male dominated world of the judiciary”.

Hale said:- “Feminism is believing in equality, equality for women and the validity of women’s experiences.  That is how I define feminism.

She also spoke of sometimes lacking in confidence, and talked of how Gina Miller, the businesswoman and campaigner who brought the case to the Supreme Court, dressed to help give her the confidence to fend off “people’s bigoted assumptions”.

Hale suggested that this was a metaphor, “throwing light on this problem that women generally lack confidence”.

The article finishes by saying that Lady Hale has asked Mary Arden, who has joined the Supreme Court:- “I have asked her please, please when I retire, would she keep up the good work”.

Whatever you think of Lady Hale’s views, the one certainty it seems to me is that she is demonstrating yet again where on the spectrum her political values come from.  So she is vividly demonstrating that the Blairite creation of the Supreme Court has worked well from its creator’s point of view in entrenching Blairism into the Constitution.  It also vividly demonstrates the general effectiveness of the Left’s “Long March through the Institutions”. 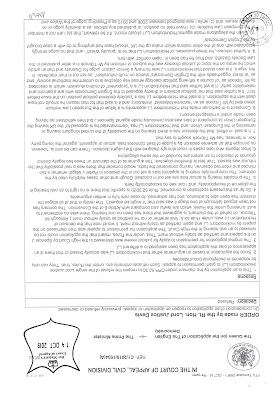 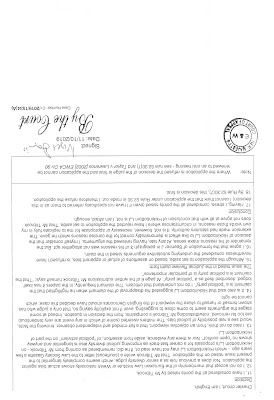 Above are the images of the Order that I have just received, which disappointingly confirms that our case is not going to be allowed to have even a single hearing. (Apologies for the way it has reproduced on this blog!)

The tone of the reasons for the Order is more reasonable than the previous two Orders that we have had in this case. I do however find it interesting that this Judge has come out with yet another set of inconsistent reasoning as to why our case would not succeed.  In my view, as we have now had three different Judges, all of whom have given a different basis on which they are refusing the case.  Speaker Bercow had a yet further different view.  Between them they have vividly shown why this is a case that should have actually been properly heard.  Proper legal argument should have been listened to, so that the Court could have come to a proper reasoned decision.  That would have been the way that a Judicial Review decision would have been dealt with until very recently.

What we have however uncovered here is, not only the extent of politically biased personal agendas within the Judiciary, but also a drastic deterioration in the general standards of fairness and of open justice in our country. This bodes very ill for the future of a country which once had one of the very best justice systems in the world. The English justice system was seen as the very model of the best system of the idea of the “Rule of Law”.

I would say that although I do not know Lord Justice Davis, but he must mix with very different people to any that I meet or hear from on social media, since I have yet to come across anybody who thinks that it is right and proper that a Judge who has signed up to the European Law Institute could fairly hear a Brexit case or be considered anything other than biased on the issue of Brexit.

In the circumstances I have now taken this case as far as it can possibly go in the England and Wales jurisdiction.

I am continuing with our Application to the European Court of Human Rights on the basis that they would not give us a “public hearing”, the case was not dealt within a “reasonable time”, given its importance, and also that we did not get an “impartial” tribunal.

I am also pursing the Courts to provide disclosure under the General Data Protection Regulations of the Ministry of Justice’s Case Summary on the front of the Court file.

I have so far only encountered obstructionism, which suggests to me strongly that the Judges have been given a biased steer on this case by the Case Summary on the outside of the file before they even start to read the papers.  If this wasn’t so there would be nothing to hide!

SHOULD THE LIBERAL DEMOCRATS NOW BE PROSECUTED FOR MIS-DESCRIPTION? 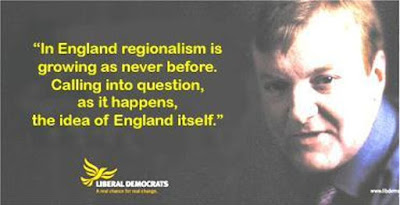 SHOULD THE LIBERAL DEMOCRATS NOW BE PROSECUTED FOR MIS-DESCRIPTION?

At the Liberal Democrat Conference, Jo Swinson, their new Scottish Leader (when was the last time they had an English one?) breezily called for the votes of 17.4 million British voters (15,188,400 English voters) to be disregarded.  The “Liberal Democrats”, if elected to Government, would simply now revoke the Article 50 Notice served by Theresa May on 29th March 2017 under the EU Notification of Withdrawal Act 2017 (which by rights should have got us out of the EU at 11.00 p.m. on the 29th March 2019!).

Following this policy shift by a woman whose husband is apparently in receipt of millions of EU money (see article below), the mask has been dropped by this Party of being willing to abide by democratic decisions.

As their former Leader Paddy Ashdown put it on 23rd June 2016 on the TV referendum vote programme:- “I will forgive no one who does not respect the sovereign voice of the British people once it has spoken. Whether it is a majority of 1% of 20%, when the British people have spoken you do what they command. Either you believe in democracy or you do not.”

The “Liberal Democrats” also show by their addiction to Europhile Statism that they are against the bedrock of liberalism, which is “Free Trade”.  Rather than Free Trade what they want is EU State regulation.

In short they are a Party which is completely devoid of either Democratic or Liberal values.

In addition to this the “Liberal Democrats” are very much a Party which is globalist and hates the very idea of our traditional nation and our nation state.  This is at the root of why they are not willing to recognise a democratic vote because they would deny that the People of our country are even a “demos”.  The Liberal Democrats particularly loath the idea of England as the above quotation from their former leader Charles Kennedy vividly demonstrates.

So Liberal Democrats are not merely a blight on our national politics but their whole way of thinking is actually a vicious cancer within the heart of our Nation eating away at its very existence.  So the question arises what can be done about them?  Clearly we can campaign against them and should do so.  We should of course also campaign against their multi-culturalist, globalist values, but can we bring the law into the equation?

It is of course particularly important for the English Democrats to stop the Liberal Democrats from besmirching and misusing the word ‘Democrats’ in their Party name!

In the circumstances we have an interest in prosecuting them if at all possible.

The relevant legislation is the Trade Descriptions Act 1968 as amended by the Consumer Protection from Unfair Trading Regulations 2008.  An issue is whether politics is a trade.  I don’t think that question has been legally tested though and after the “Liberal Democrats” behaviour would you call their politics a profession?

The way to bring a prosecution is I think that we could prosecute their Party for selling something which is using their false description.

Here is an article about Jo Swinson’s husband’s sizeable financial interest in supporting the EU:-

“IT LOOKS LIKE JO SWINSON’S PASSION TO STOP BREXIT OR A NO-DEAL BREXIT “AT ANY COST” HAS TERMS AND CONDITIONS APPLIED.
Swinson’s point blank and quite illogical refusal to join the cross-party coalition to prevent a no-deal Brexit has a 3.5m euro explanation. And the irony of the whole context goes to show that the LibDems are as insincere and deceitful as they ever were.”
This is political dynamite. The European Union gave a 3.5m euro donation to Transparency International, which in peak irony is supposed to be an anti corruption watchdog with a mandate to foster, erm, transparency.

It is run by Jo Swinson’s husband. Has Jo Swinson declared this conflict of interest to the House of Commons? No.
Is that a breach of House of Commons protocol? Yes.
Is it a breach of the law? Yes.
So who is Jo Swinson’s husband? His name is Duncan Hames. He is the director of policy at Transparency International UK.
He also used to be the Liberal Democrat MP for the Chippenham constituency in Wiltshire, holding the seat during the disasterous Cameron/Clegg coalition government responsible for the deaths of 130,000 poor, sick and disabled people under their deadly “Welfare Reforms”.
The same Welfare Reforms Iain Duncan Smith justified with the phrase “Work Frees People” – a sentence last seen, in German, above the entrance gates to Auschwitz.
Unlike Lib Dems we aren’t prone to calling our opponents “Nazis” simply for disagreeing with our political opinions but in this instance, if the cap fits…
During this period Mr Hames was Parliamentary Private Secretary to none other than David Cameron’s number 2, Nick Clegg.
So as you can see, the Swinson family household has its fingerprints all over the social degradation our nation suffered during that horrendous 5 year period.
The idea that the Liberal Democrats under Jo Swinson are the answer to our nations’ current predicament does not stand up to a single moment of scrutiny.

Here is a link to the original article>>> https://nyebevannews.co.uk/swinson-fails-to-declare-family-company-was-given-3-5m-euro-by-the-european-union/