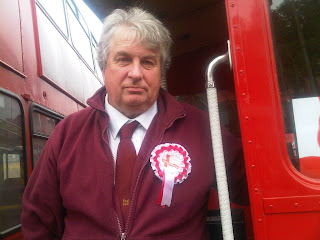 A popular member of the English Democrats he is a member of the Royal British Legion Riders Branch and poppy tin Distributor, having served in the R.O.C. in the seventies when he was trained in nuclear defence.

A committed Anglican he has been a Christian Aid doorstep collector for the last twenty years, a Parochial Church Council member and 'Churches Together' representative.

Michael joined the SDP (Social Democrats Party) in 1984 at the Crosby by-election and also campaigned for the SDP in Glasgow Hillhead. He is an ex-Liberal Democrat constituency party chairman and election agent. Michael left the Lib Dems in 2002 after being ordered by the Gravesham party to remove the word “Christian” from his County Council leaflet! He was also concerned by their growing anti-English stance and so joined the English Democrats.


Robin Tilbrook said:- “In the November Police Commissioner election in South Yorkshire we came within a whisker of winning – we would have done so if second preferences had come into play. Interestingly most Labour voters had put English Democrats as their second preference and also so had most Liberal Democrat voters”.

Robin said:- “We are aiming to replace the Liberal Democrats as the choice for those voters who have noticed that the British Political Establishment does not have any regard for England’s needs. It is significant that our candidate, Michael Walters, has previously been a Liberal Democrat.”

Robin asked:- “If we can persuade a great activist like Michael Walters to come over to us – why not almost all patriotic Liberal Democrat and Labour voters as the process of devolution reminds the English people of their Englishness? In the 2011 Census over 32 million people in England stated that their National Identity is “English Only”. In the Eastleigh Council area it was 65.6% or 82,146 people. English Nationalism is rising and will eventually sweep away those politicians and parties who stand against it."