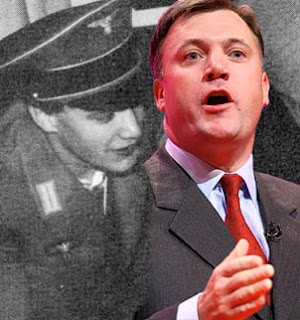 Here is a guest post:- Hate filled and anti-English Nick Lowles refuses to engage in open debate about the important role that English civic nationalism has in creating a cohesive society.

Let me explain.
When Nick Lowles mentions that several Ex-BNP members who have joined the English Democrats he conveniently forgets to tell you the following about Labour Party members:-
· That Jack Straw used to belong to the Communist Party (exactly how many people have Communists killed Nick?
· That Ed Balls wore a Nazi outfit when at University (see http://www.thejc.com/news/uk-news/84673/ed-balls%E2%80%99s-not-embarrassed-nazi-pic)
· That various ex-BNP or Far Right members have joined the Labour Party and that at least two are now Labour Councillors.
· That Ken Livingstone regularly made extremist comments.
· Labour’s Lord Ahmed is alleged to have placed a £10 millilion bounty on the head of Obama (click here>>> http://www.dailymail.co.uk/news/article-2130256/Lord-Ahmed-Rotherham-offers-10m-bounty-detain-Obama.html#axzz2JsGBUqjC ).

· Look at Salma Yagoob controversial comments >>> http://blogs.telegraph.co.uk/news/danhodges/100180603/salma-yaqoob-once-described-the-77-murders-as-reprisal-attacks-she-doesnt-belong-in-the-labour-party/
Also on the Left, look at the recent revelations about the Socialist Workers Party’s cover up about a colleague’s rape >>> http://socialistunity.com/how-the-revolutionary-left-has-systematicaly-failed-to-prevent-sexual-abuse/
Do we hear any criticism from “Nick" about any of these?
All I ask you to do is to ponder the hypocrisy of Nick Lowles' stance. Labour’s dirty trick department comes to mind!
Nick Lowles also forgets to tell you about his past as well. Please look at this link >>> http://en.metapedia.org/wiki/Nick_Lowles. Be careful when listening to his words!
All the English Democrats want to do is to unite England and ensure that our people have a democratic voice. We are trying to unite a country that is facing huge cutbacks. To unite people you need to be prepared to listen to their views, you need to apply the Christian principle of forgiveness and you need to allow people to change their minds.
Nick can only say that the ‘English Democrats are firmly in his sight’ because he does not have anything that makes us extremists, all we are doing is what any respectable and democratic Political party should do and that is meet people so we can explain our policies. Sorry Nick, I know you don't want to hear this but we demand that any new members follow our moderate English nationalist approach.
The reason Robin Tilbrook has repeatedly challenged Nick to an open debate is to show that we speak the truth, that moderate English nationalism is important in bringing our communities together. Instead of engaging in open debate Nick Lowles hides behind his keyboard and spills out hate and untruths.
The English Democrat have nothing to hide, we speak the truth, we simply believe that England is being treated unfairly. Initially Nick Lowles agreed to a debate but then no doubt he thought that he wouldn’t win it so now he refuses to debate.
Now Nick Lowles condemns the English Democrats for trying to stop Nick Griffin from a winning seat. Strange what anti Englishness makes you say Nick? You should be praising us if there was any consistency to your line of attack!
He goes further and attempts (behind his keyboard) to accuse us of filling the vacuum left by the electoral collapse of the BNP but the truth is he is more concerned that we are taking votes from traditional Labour areas.
Please remember that one million people voted for the BNP and probably most of those were once Labour supporters or voters.
All you need to do is to look at the success of the English Democrats’ Mayor in the once Labour heartlands of Doncaster and also our second place in the South Yorkshire Police Commissioner elections in November. That happened without us being able to, even remotely, match the campaign spending of Labour!
What Nick Lowles fears is what the English Democrats will be capable of when we get through to the over 70% of people in South Yorkshire who consider themselves to be English!