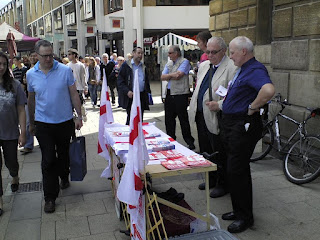 Stephen Goldspink (in the dark blue shirt) is standing for Cambridgeshire Police Commissioner in the November Election and needs support, help leafleting and inevitably money! If you can help please email him on Cambridgeshire@EngDem.Org

Here is a letter that he has got published in both the Hunts Post and Peterborough Today:-

Yet again people who live in England suffer at the hands of a Government who have not the slightest inclination to support the people of England, inflicting a rail fare rise of the rate of inflation plus and extra 3% - making a whopping 6.2% rise! That’s a huge increase, but in Scotland, the rise is only inflation plus 1%.
Why is this? Because the Scots receive a bigger share of the UK’s income per head and the Scottish Government stick up for the people of Scotland. Thus neither they, nor those people who live in Wales and have an assembly to speak up for them, pay prescription charges, but the people of England do – and how - £7.65 per item!
All of the countries in the UK have a separate assembly to stand up for their citizens, except England. As a result, those who live in England are continually exploited and discriminated against by Governments of all colours, mainly led by Scots (Brown), those with Scottish roots (Cameron) and those who simply won’t see the problem (Clegg).
If England was fairly funded, there would be more money for our local Government, our health service and our police. We’re not asking for favours, just fairness. Isn’t it strange how there are laws preventing discrimination against people for all sorts of reasons, but also laws that promote direct discrimination depending upon which country of the UK you live in, rubber stamped by British Establishments parties who deliberately refuse to see the double standards.
According to Government statistics Scotland gets over £2,600 for every man, woman and child than England's "Eastern Region".
November 15th 2012 sees elections for Police and Crime Commissioners across the UK, and I am standing in Cambridgeshire. I offer sound business and police related experience and an excellent track record in representing people, against a background of standing up for England. Please don’t vote by simply by colour – think about who you want to effectively represent you, and send a message about inequality and unfairness in England to the complacent and disinterested major parties.