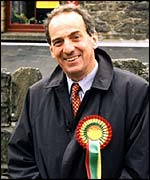 In the last few days we have seen an interesting disclosure about Tony Blair’s government’s approach to looking after the constitutional interests of England. This issue is usually referred to, within the media and Establishment as the “West Lothian Question”.

Although the issue was first raised by Tam Dalyell, the then MP for West Lothian, by calling it the West Lothian Question the media and Government disguised the fact that this question isn’t at all about West Lothian, but is entirely about England and England’s place within the constitutional framework.

Many questions have been asked in the past about why it was that England was left out of Labour’s devolutionary scheme, when Labour was considering devolution for Scotland and Wales. When he was a Minister, Jack Straw used the National Interest/Security exemption to refuse to release the Cabinet papers on this decision and thus to avoid the ruling of the Information Commissioner ordering their production.

All Jack Straw’s efforts have now come to nothing with the answers given by Kim Howells to this Coalition Government’s West Lothian Question Commission under the Chairmanship of Sir William McKay, which I gave evidence to earlier this year (here is a link to that evidence >>> http://robintilbrook.blogspot.co.uk/2012/06/my-evidence-to-mckaywlq-commission.html ). Kim Howells in the BBC website article below frankly confesses that, knowing that the English question was difficult to answer except by creating an English Parliament, the Labour Cabinet deliberately set about trying to avoid dealing with the question at all.

Now that the cat is out of the bag on this particular issue, it is interesting to see that one of the chief architects of Scottish Devolution, the capo di capi of Labour’s Scottish Mafia, Gordon Brown, will come out at this week’s Edinburgh Literary Festival, with a speech no longer using his old expression of “The Nations and Regions of Britain” (where the regions were England), but now he is talking about “Scotland and the UK” separate entities!

So I wonder if we will find that, after all the huge financial transfers from England to Scotland organised by Gordon Brown; and the transfers of whole Government offices to Scotland, such as the UK’s tax collectors; and the use of untold billions of the Defence budget spent in Scotland, not only in doing the vast investment in the infrastructure of Faslane but also the current building of two aircraft carriers in Scotland instead of on Tyneside; after all this, are we now to find that Gordon Brown was a Scottish Nationalist after all?

Labour made a "conscious decision" to stay away from the West Lothian question, Kim Howells says
The previous Labour government decided to avoid dealing with the "very difficult" questions created by devolution, says a former minister.

Kim Howells said Labour opted to "stay well away" from the implications for MPs' voting rights.
The former Pontypridd MP gave evidence to the McKay Commission meeting in Cardiff into the West Lothian question.

The question asks whether Welsh, Scottish and Northern Irish MPs should have a vote on English-only matters.

'Small anomaly' It was first posed in the 1970s by Labour MP Tam Dalyell, whose constituency at the time was West Lothian. Dr Howells, whose ministerial posts included time in the Foreign Office and education, was on the cabinet committee that drew up the post-devolution settlement after the Labour landslide at the 1997 general election.

He told the commission that the then Labour government made a "conscious decision" to "stay well away from" the question.

He said: "We never discussed it. We had all heard of the West Lothian question.

"We all knew Tam Dalyell and knew the questions Tam was asking were very difficult questions."
Since the creation of the Welsh and Northern Ireland assemblies, and the Scottish Parliament, Dr Howells said he could not see an alternative to the creation of an English parliament - although he added: "I'm not in favour of one by the way."

Creating a grand committee of English MPs would be "just another way of avoiding the West Lothian question" and would "generate a demand for an English parliament", he said.

Former First Minister Rhodri Morgan told the commission: "On a scale of anomalies I would call it a pretty small one."

Mr Morgan posed an alternative "West Glamorgan question", citing the example of English Conservative MPs who rebelled against local government re-organisation in their own constituencies, but voted for it in Wales.

Most bills which pass through parliament affected public spending, he said, making it difficult to ring-fence English-only votes.

Asked if that meant all MPs should be allowed to vote on bills with resource implications, he said: "I can't see how they can be excluded."
Posted by Robin Tilbrook at 17:48