It has been brought to my attention that Nick Griffin, Leader of the British National Party (BNP) has made what can only be described as the elementary mistake of attacking a “rival” opposing Party on his Party’s main website and thus on the most public face of his Party. 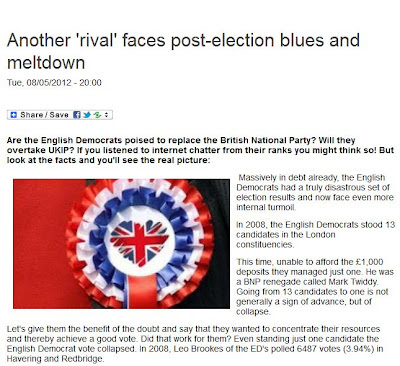 What is more, the article (click here to see it >>> http://www.bnp.org.uk/news/national/another-rival-faces-post-election-blues-and-meltdown) appears more than usually spiteful and petulant. In particular I really cannot understand the psychology of a senior Party figure, let alone the Leader, of the BNP, implicitly suggesting that anyone who is now or ever has been a member of the BNP must therefore be such a terrible and unacceptable person that however much they change their mind about politics, they can never be admitted into a respectable Party, like the English Democrats. There does seem to be a truly weird element of self-hatred in such a thought process!

Most of the alleged facts stated in the article are untrue or twisted beyond recognition. For example it is claimed that the English Democrats are in debt. Whereas the only debts of the English Democrats arise from the willingness of myself and other members of the Party to put their hands in their pockets to fund our Party and Cause. I wonder if the same can be said within the leadership of the BNP?

It is also true that we did not raise sufficient money to do a full campaign in the London elections, but as I have mentioned in my previous blog entry, we stood in the Party List and spent less than £1,000 on the election campaign, literally only distributing our general recruitment leaflet (a pdf of which you can find on this link >>>> http://www.voteenglish.org/images/stories/engdemrecruitment.pdf). So what is clear is that most of those that voted for us will have voted for us without even receiving a leaflet this time. This shows that we already have a core vote, even in London, which contains some of the least fertile constituencies for us, of slightly over 1% of the turnout, or over 22,000 votes.

If we had received the media coverage that the BNP received in the GLA election and, as we hope to on the next occasion, had raised enough money to do a full campaign, I suspect that Nick Griffin would have excellent cause to write an even more querulous article than this one about that result!

I cannot finish however without pointing out that, simply because former party members and activists move over to a new party, that does not make them in any reasonable sense “traitors”. It is the unbridled use of such, frankly, silly language which has helped to taint whatever good there was in the BNP brand. Its use here shows that neither Nick Griffin, nor the BNP, can any longer be taken seriously and no wonder Dr Matthew Goodwin of Nottingham University who is the foremost academic analyst of the BNP, tweeted this >>>