Union supporters comment that a poll result showing 33% support for Scottish Independence is comforting. On the contrary is shows that the UK is likely to be at an end in 2014.
The Scottish issue won’t be decided by mere opinion but by voters who take the trouble to vote in the referendum. It is now almost a truism that turnout will be about 60%. Therefore if over 30% of the electorate turnout and vote for independence then they will deliver a ‘Yes’ vote.
Robin Tilbrook, Chairman of the English Democrats said:- “The issue will be decided by the most committed nationalist supporters of Scottish Independence who are far more likely to actively vote, so the likelihood of a vote for independence is high and Unionist complacency is badly misplaced. Whilst Scotland has its referendum England should be having one too and indeed would be if we had a government that cared about England at all!”

The United Kingdom is under no threat of breaking up, according to a survey published on the eve of Friday's official launch of the Scottish separatists’ referendum campaign. 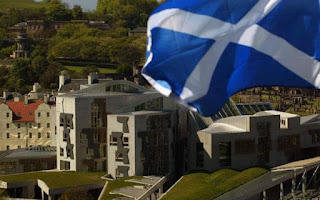 A You Gov poll showed that more people think a separate Scotland would be worse off financially Photo: David Cheskin/PA Wire
By Simon Johnson, Scottish Political Editor
6:36AM BST 25 May 2012
An opinion poll published by Alistair Darling, the former Chancellor, showed only 33 per cent of voters in Scotland want independence and 57 per cent are opposed.
In his first intervention since becoming leader of the pro-UK campaign, Mr Darling said the poll showed Alex Salmond “doesn’t speak for Scotland” and support for independence has barely shifted over the last four decades.
Mr Salmond will be joined in Edinburgh this morning by celebrities and the leaders of minor left-wing parties to formally start his bid to end the 305-year-old Union between England and Scotland.
Sir Sean Connery is expected to be among the stars who will encourage the Scottish people to vote for separation in the referendum, due in autumn 2014.
Mr Darling’s publication of the The YouGov poll, which also showed more people think a separate Scotland would be worse off financially, was timed to undermine their message.

“Alex Salmond may be the First Minister of Scotland but, as these new figures confirm, on the issue of independence he doesn’t speak for Scotland,” the Edinburgh South West MP said.
“The nationalists will go to great lengths to try and prove there is a groundswell towards leaving the UK but the truth is their campaign has stalled. Independence is an unpopular as it has ever been.”
The former Chancellor said Mr Salmond has failed to increase support for separation after deploying the “full resources” of Scottish Executive’s civil service, the SNP’s landslide Holyrood election victory last year and raising a war chest of millions.
His survey asked 1,004 Scots if they agreed Scotland “should become a country independent of the rest of the UK”. Only 27 per cent of women agreed with this statement.
In another blow to Mr Salmond, only 58 per cent of people who voted SNP last year said they would back independence, while 28 per cent were opposed.
Nearly half of respondents (47 per cent) said they thought Scotland would be financially worse off after separation compared to only 27 per cent who said it would be wealthier. Thirteen per cent said independence would make no difference.
Mr Darling was initially reluctant to assume leadership of the pro-UK campaign but has since agreed to coordinate efforts by Labour, the Tories and Liberal Democrats.