Out of the EU the easy way? Scottish Independence! 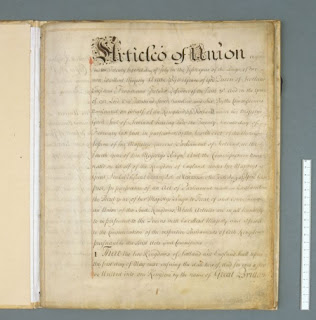 Page one from the Articles of the Treaty of Union between the Parliaments of England and Scotland.

It doesn't take a genius or a first in law from Oxford to know that if Scotland goes independent in 2014 then the UK is at an end.
As I have blogged before, the Act of Union 1707 is quite clear that the United Kingdom was the union of the two kingdoms of Scotland and England (which since 1536 has included Wales) into the new United Kingdom of Great Britain.
It follows therefore, as night follows day, that if that Union is dissolved then the Kingdoms of Scotland and England will re-emerge as seperate nation states.
The Northern Irish rump of the Act of Union 1801 with the Kingdom of Ireland would also dissolve automatically.
I suspect that the 1536 Act, incorporating the Principality of Wales, would soon follow but that would involve further legislation and not be automatic, since it is earlier and so is not founded on the 1707 Union.
The interesting consequence for English Nationalists, who overwhelmingly want to leave the EU, is explained in this article from the Daily Telegraph - I however would have entitled it:- 'England delighted to be out of the EU if Scotland Separates'!!
Britain 'forced to leave EU if Scotland separates'
"Scottish independence could see the UK kicked out of the European Union and forced to surrender its £3 billion annual rebate if it wanted to rejoin, a senior constitutional lawyer has told MPs.
By Simon Johnson, Scottish Political Editor
17 May 2012
Patrick Layden QC, a former Scottish Executive legal expert, warned that other EU countries could exploit separation to argue that the United Kingdom has ceased to exist as a member state.
Ministers in Edinburgh and London would then both have to reapply for membership, but he said they could be stripped of “ridiculous” privileges that governments on the Continent resent.
He highlighted the £3.3 billion annual rebate, negotiated by Margaret Thatcher, and the UK’s opt-out from the Schengen Agreement allowing free travel across 25 EU states.
Joining the European free travel area would mean removing border controls at airports, ports and the Eurotunnel, making illegal immigration harder to police.
Mr Layden told the Commons Scottish Affairs select committee’s inquiry into Scottish separation this is not a certainty but the final decision would rest with other EU countries.
His intervention is significant as for decades he has advised ministers in London and Edinburgh on European and constitutional affairs and only left the Scottish Executive last June.
Alex Salmond, the Scottish First Minister, has insisted that a separate Scotland would automatically retain EU membership along with all the UK’s opt-outs.
However, a series of legal experts have warned that Scotland would have to reapply and would have to negotiate its own opt-outs from Schengen and the euro.
Mr Layden told MPs that their populations would mean a separate Scotland and the remainder of the UK would be due more seats in the European Parliament but this would mean other member states agreeing to give up some MEPs.
“These aren’t insurmountable problems but if I were advising a government of another member state I might very well be saying to them ‘the Brits are chopping themselves in half but will wind up with more votes’,” he said.
“’We need to have an input into this to make sure our views on the matter are heard and expressed and a way of doing that is to characterise the process as the UK leaving the (European) Union and the two other states applying to join.’”
He said he would advise other EU members that this was an opportunity “of having a go at this British rebate, having a go at this ridiculous British exclusion from Schengen, having a go ridiculous British attitude to these JHA (Justice and Home Affairs) measures.
“There are all sorts of things that could get ‘tidied up’ in respect of other member states on the back of this.” He refused to predict whether a separate Scotland would have to join the euro.
The committee later heard evidence from trade unionist working in the defence industry that shipbuilding in Scotland would end after independence.
Duncan McPhee, Unite Senior Shop Steward at BAE Systems in Scotstoun, said that without UK defence contracts the shipbuilding industry in Scotland “would be greatly reduced, or in fact – finished”. http://www.telegraph.co.uk/news/politics/9270749/Britain-forced-to-leave-EU-if-Scotland-separates.html
Posted by Robin Tilbrook at 12:01