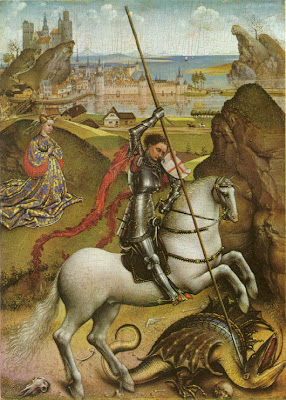 Some years ago Neil Addison, a barrister, and I conducted a case challenging, pro bono, the ruling of Norwich Magistrates that St George's day wasn't special in England.

It is a measure of how far we have moved in a few short years since 2005 that when we did this we and our cleint were made to feel daringly out of line but now it is that court decision which seems crazy - rather than the standard official view which is what it was then - then naturally the High Court in effect upheld the Magistrate's decision!

Here is the skeleton Arguement as presented by Neil in open court:-


Re An Application for Judicial Review

1) In the reply from the defendants in this case and in the refusal of leave to apply for Judicial Review the point is made that licensing legislation is changing and the Licensing Act 1964 will no longer be in force in 2006. It is respectfully submitted that that argument is accepted by the court then the effect is that the Claimant is entirely without any form of legal remedy even though he claims to have been treated unlawfully. It is respectfully submitted that such a response should be rejected by the Court.

The defendant is not seeking damages but he is seeking a recognition of the fact that he has been treated unlawfully. Even though a judicial declaration cannot change the past the obtaining of a declaration is itself a remedy which he is entitled to have.
As was stated by Lord Denning LJ in Barnard v National Dock Labour Board 1953 1 AllER 1113, 1953 2QB 18 (last paragraph of his judgement)

“In the course of the argument counsel was compelled to admit that if the plaintiffs had no remedy by way of declaration they had no remedy at all. ……….if the plaintiffs cannot get redress here they cannot get it anywhere else. I think that they are entitled to redress “
That judgement by Lord Denning was supported by the Judgements of two other Judges of the Court of Appeal.
Similarly in the case of R v Secretary of State for Social Services ex parte Association of Metropolitan Authorities 1986 1AllER 164 Romer LJ granted a declaration that certain statutory regulations had been improperly made even though by the time of the hearing the regulations in question had been superseded by new and lawful regulations.

Correction to Response by Defendants

2) In page 2 of the response from the defendants (paragraphs not numbered) it is said of Claimants Exhibit TB/4 that “only pages 16 to 20 relate to functions organised in 2005.”. This is incorrect pages TB/4 1-12 also deal with events in 2005. The list in pages 16 to 20 are also described as “relatively short”. A breakdown of the events in 2005 is as follows

3) Furthermore the Claimant submits that any consideration of the legality and correctness of the defendants decision must be based not on their detailed response but on the Judgement that they gave at the time as set out in document TB/2 annexed to the Claimants witness statement. In that judgement they said that the events organised by the Claimant

“is not part of any national or local celebrations organised primarily by third parties instead it is organised by Mr Bennett and he would benefit financially from any extension. A licensee is not entitled to organise an event and call it a special occasion”

The Claimant therefore submits that the reasoning used by the Magistrates in reaching their decision was fundamentally flawed The Claimant did not invent St Georges Day, nor did he invent the fact that St George is the Patron Saint of England. The events he was organising were part of a large number of St Georges Day events being organised throughout England and should have been recognised as such by the Magistrates..