A great partnership for England too? 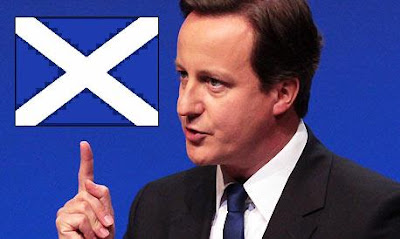 Today we had a highly revealing and significant exchange in the House of Commons, during Prime Minister's Questions. Here is a transcript:-
12:21 22 February 2012
Frank Field MP:
“Given what the Prime Minister said last week in Scotland, will he devote as much time to facing up to the grievances that the English feel, from the current proposals of devolution, as he will be giving to considering new proposals of devolution for Scotland? Will he open a major debate here in the House, on the English Question? So that members from all parts of the House can advise him on what measures of devolution England needs, if we are to gain equity with other countries in the United Kingdom?”

12:24 22 February 2012
David Cameron PM:
“We have obviously set up the West Lothian Group to look at this Issue, and obviously we want to make sure that Devolution works for everyone in the United Kingdom, but I would part company slightly with the Right Honourable Gentleman, for this reason, that I believe the United Kingdom has been an incredibly successful partnership between all its members and I think that actually, far from wanting to appeal to English People that in any way to sort of nurture a grievance they may feel, I want to appeal to my fellow Englishmen to say, this has been a great partnership; a great partnership for Scotland; but a great partnership for England too; of course Scotland must makes its choice, but we hope that Scotland will choose to remain in this partnership, that has done so well for the past 300 years"

Here is the link, if you would like to see the PMQ question asked by Frank Field >>>
Click here

This reply from David Cameron is disingenuous as to the remit of his West Lothian Question Commission which has no power to consider the English Question generally. I did an article about this commission here.

How strange for Cameron to now try to call himself an "Englishman" when, despite being an MP for an English seat, he declared to the BBC's Andrew Marr, that he wasn't going to do anything about the unfair extra funding formula for Scotland because "I'm a Cameron" and "there is quite a lot of Scottish blood flowing through these veins." Could he now be trying to bamboozle us that he is one of us after all?

Also it should make it crystal clear to anyone with ears to hear that neither he nor the Tories will ever be interested in doing what is right and fair by the English nation. Also it shows that we need our own party to (politically) force the British Unionist Establishment to do right or to replace them!