Supporting the Out of EU Campaign 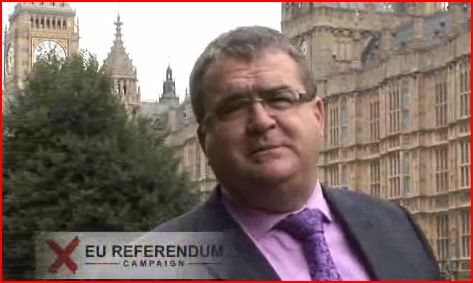 Last September the celebrity journalist and commentator, Jon Gaunt ("Gaunty"), asked to come and speak at the English Democrats' Annual Conference. He spoke to us about the launch of his, then new, EU referendum campaign group. As you would expect from English nationalists, Jon and his campaign were enthusiastically supported by one and all!

I was therefore delighted when Jon mentioned to me a few days ago that his group is now aiming to run local referenda in the LibLabCon leaders' contituencies. Jon then asked would the English Democrats help - especially in Doncaster North, Ed Miliband's constituency?

I immediately spoke to our Executive Mayor of Doncaster, Peter Davies, and he was also delighted to help and to throw the weight of his mayoralty and therefore of Doncaster MBC behind the campaign! I look forward to the progress of a campaign which will put Ed Miliband's kneejerk Islington Europhilia to a stress test! The English Democrats will be doing all we can to help!

Here is Jon Gaunt's Press Release:-
Now Is The Time – Cameron Should Let The People Decide
The British public now has even less of a say in the EU yet still pays £51m a day

The Vote UK Out of EU Campaign welcomes David Cameron’s stance on the EU Treaty yet demands the Prime Minister goes one step further and offers to put the question on the future of EU membership in a straight in/out referendum to the British public.

The Prime Minister should be congratulated for refusing to sign the Treaty but as a result it is clear that we are more isolated than ever before. Now is the time to go further. In previous polls taken by the Vote UK Out of EU Campaign, people across Britain have made their views clear – they want out.

They have had enough of the endless regulation, the ridiculous waste of billions of pounds of our money and politicians bossing us around who were not elected here in the UK.

In response to this widely held view, the Vote UK Out of EU Campaign has announced that it is to hold three independently run referendums in the party leader’s constituencies of Witney, Sheffield Hallam and Doncaster North. These will be run by the Electoral Reform Services and will be completely independent from the campaign. Paid for by campaign supporters including businesses, the campaign has been encouraged by emails of support and generous donations made online since the announcement of the referendum. Furthermore, individuals are now coming forward offering to pay for a referendum in their constituency.

Commenting on this and David Cameron’s refusal to put the question to the British public, Vote UK Out of EU Campaign spokesman, Jon Gaunt said:

“We congratulate David Cameron but he hasn’t gone far enough. He has left us even more isolated and more vulnerable than before. Britain is a strong nation and can survive without being held back by other EU countries – now is the time to trust the British public and put the question to them via a referendum.

“When the British people realise that they have even less say on how their £51 million a day is being spent in the EU, they will quite rightly demand their money back. When this country is in a deep recession, how can we justify spending this outrageous amount of money? It has to stop. What is David Cameron frightened of? Our referendum next May will put even more pressure on him to do the right thing and offer the opportunity to the rest of the UK”.

The UK is now a member of a “two speed” Europe with the other 26 member states jammed in the slow lane. However, the UK could be speeding along in the fast lane if Cameron heads for the exit that leads to giving the British public an in/out referendum on EU membership.

Click here for the press release >>> http://voteukoutofeu.co.uk/press-release-now-is-the-time-cameron-should-let-the-people-decide
Posted by Robin Tilbrook at 12:29