How Scots think about the Union - the latest poll 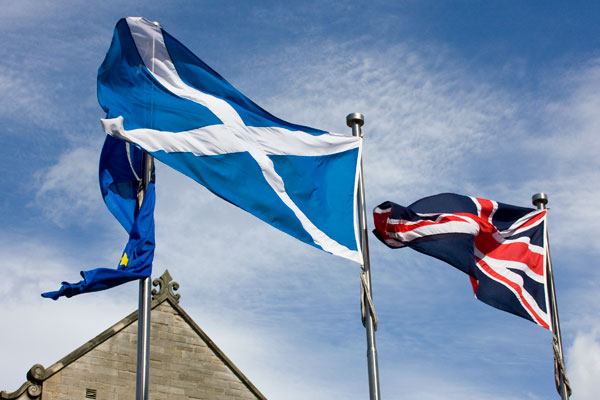 Here is an article from the Scottish Newspaper "The Daily Record":-

Price of independence: Poll shows majority of Scots would back split.. if it made them £500 better off
Dec 5 2011 By Magnus Gardham

TWO-THIRDS of Scots would back independence if they believed it would make them £500 better off, according to a poll.

But only one in five would want to go it alone if it meant a £500 a year reduction in living standards.

The findings suggest the economy will be key in the run-up to the SNP's referendum, expected in 2014.

Overall, 32 per cent of voters said they were in favour of independence, despite First Minister Alex Salmond's efforts to convince the public.

However, the figure is the highest recorded by the Scottish Centre for Social Research since 2005, when it stood at 35 per cent.

Support bounced back from a low of 23 per cent last year.

Polls expert John Curtice said: "The appetite for a more powerful parliament, including independence, has grown in the past 12 months.

"However, support for independence is still no higher than it has been on previous occasions since the advent of devolution.

"If the SNP are to persuade a majority of Scots to back independence they will need to convince them of the economic case for leaving the Union, and that is a debate that is still to be won or lost."

The poll showed that, at present, 34 per cent think the economy would perform better if Scotland split from the UK, while 29 per cent think it would do less well. The findings sparked a war of words between parties last night.

Deputy first minister Nicola Sturgeon said: "This is a big boost for Scotland and independence.

"Now we know that two-thirds of Scots are prepared to back independence on a positive basis.

"Since the reality is that Scotland puts far more into the London exchequer than we get back in return, the 'yes' campaign can and will win the economic case for independence."

But shadow Scots secretary Margaret Curran said: "Far from being the breakthrough the SNP wanted, this shows the vast majority of Scots support devolution and want to see it stronger and better.

Sturgeon and welcomed latest poll "The SNP have been in power for almost five years and each year support for separation is actually lower than when Labour formed the Scottish government."

She added: "Polls like this explain why Alex Salmond won't name the day. There is nothing in the SNP manifesto that stops them calling a referendum now and the only reason for delay is because they fear the verdict of the Scottish people.

"The referendum isn't a test of how much you love our country - every Scot does - but is about what is best for Scotland."

This article moved one of my correspondents to write this to me, what do you think?

"The recent revelation that the Scots would leave the union only if it was financially viable says all that any English person needs to know.

It is obvious that the majority of Scots see Britain as a free credit card. It was money in 1707 and it is money now.

Are we so desperate that we have to pay the Scots to stay in an unwanted union?

Divorce is long overdue in this marriage of convenience.

Even the most complacent of Englishmen must now recognise that we need our own parliament to look after our interests or we shall be taken to the cleaners once again."
Posted by Robin Tilbrook at 11:50