Oh dear! The poor old Brits just don't get it , do they?

"Mayor writes to ministers after Scottish victory", Adrian Pearson of the Newcastle upon Tyne based newspaper "The Journal" reports:- 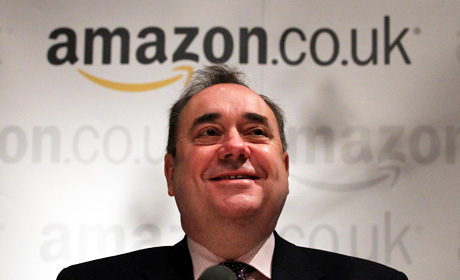 "CHANCELLOR George Osborne has been urged to address the threat to the North East economy after 900 would-be Tyneside jobs went to Scotland.

North Tyneside elected mayor Linda Arkley has written to cabinet ministers warning that the region’s economic recovery will be undermined if Scotland is allowed to offer lower taxes while at the same time possessing a multi-million fund to tempt in new firms.

Her warning comes after it emerged internet book supplier Amazon ditched plans to open a new customer service centre in North Tyneside and instead choose Edinburgh when the company secured a £1.8m grant from Scottish Enterprise to train new staff. The company said help from Scotland’s dedicated business support group was an important part in its decision.

The banks of the River Tyne are host to a large section of the North East enterprise zone, offering five years of lower business rates and increased capital allowances for manufacturing firms likely to set up there.
Last month it was chosen as the location by the council leaders and major employers forming the region’s local enterprise partnership.

North Tyneside Council would not comment on the Amazon snub, but Mrs Arkley has released letters sent to the Department for Business and the Treasury over the summer warning of the need for a level playing field.

In her letter she said: “Given the North East’s proximity to Scotland, their ability to offer incentives and have powers over levels of corporate tax, in addition to further levers to drive forward economic growth, represents a significant threat to our moves at a local level in North Tyneside and across the local enterprise partnership area to attract businesses to invest and bring jobs to the area.

“At a time when we are taking forward moves to rebuild and rebalance the economy, granting greater freedoms to Scotland could inadvertently undermine our ability to take these steps to the best of our abilities on behalf of our communities.”

Mrs Arkley added: “I would strongly urge you, in all negotiations with the Scottish Government, to consider the implications of any greater freedoms for Scotland on the economy of the North East given our geographical proximity.”

In a letter to Business Secretary Vince Cable, she warns the minister his actions risk creating an “un-level playing field when an area of deprivation and high unemployment is prevented from offering financial support, yet Edinburgh is able to use public money to attract a project to their city, already relatively affluent by comparison.”

Ms Arkley was repeating concerns voiced last month from the region’s oil and renewable energy sector, which competes with Scotland for jobs and investment.

Andrew Hodgson, chair of industry body Subsea North East agreed a balanced playing field was needed.
He said: “The North East is the region within the UK with the highest level of unemployment. We require the appropriate support to enable us to promote our regions advantages in a fair way. Our proximity to Scotland will always mean that we have to be aware of the incentives offered there."

“I am confident that measures that have already been announced in relation to the enterprise zone can provide a base to begin to address these issues, but we have to build a stronger support base if we are to deliver improved economic prosperity.”

A spokesman for the Department for Business said: “The Government is committed to promoting growth across the whole country, and we are working closely with local enterprise partnerships to understand the barriers to local growth.

“These partnerships, including the North Eastern partnership, are helping to shape government policy, for example, imputing into the growth review work.”

With great respect to the Lady Mayoress, whom I am sure is a decent and well meaning qualified nurse (albeit a Tory), it is obvious that the isue here isn't between Scotland and the "North East" (whatever that might mean after its comprehensive rejection as a concept by the electorate in the 2006 regionalisation referendum) it is between Scotland and ENGLAND!

Her purblindness on this national issue is characteristic of Establishment officialdom and, like the story of the Emperor's new clothes, is both a tale of 'group-think' and of there being 'none so blind as them that will not see"!

England has no-one in government arguing for English interests to be looked after. In these circumstances, it should really not surprise anyone, of any sense at all, that our interests are all too often ignored by the British Government.

We need our own First Minister, Government and Parliament with at least the same powers as the Scottish ones! And,before more damage is done, we need them NOW!
Posted by Robin Tilbrook at 17:23