MY AFTERNOON SPEECH TO THE ENGLISH DEMOCRATS’ AGM

Here is the picture that the Guardian took of me making the speech: 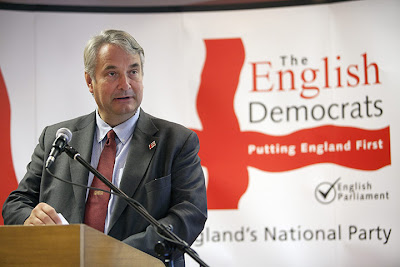 Welcome back and now that we have cleared up our various formal house-keeping issues for the organisation of our Party, I would like to turn our attention to the strategic situation for the English Democrats.

One of the strategic realities that we have always to contend with and therefore to accept is that, in England, we have a media and an officialdom that is deeply hostile to the very idea of England.

I would remind you of Charles Kennedy’s comment, when he was Leader of the Liberal Democrats, he felt it was perfectly legitimate and permissible to say he supported Regionalisation, a policy which had nothing more or less behind it than the intention of breaking up England altogether. He supported it he said and I quote:- “Because Regionalism in England is calling into question the very idea of England itself”. Just imagine if an English politician had said the exact same thing about Scotland! To attack England and the English Nation in that way is seen as perfectly legitimate and acceptable to our rulers. The media in general in many cases are just as much part of the current political class as are the Liberal Democrats and are certainly just as keen to denigrate England and the English Nation.

I personally have been repeatedly faced over the last 10 or more years with questions as to whether I, and we, are far right extremists and/or part of the BNP for simply daring to mention the dreaded ‘E’ words, by which I mean England or English. We are not and never have been and never will be.

But let me tell you Ladies and Gentlemen, we are not going to be discourage and we are not going to give up mentioning the ‘E’ words and in fact we are going to say those ‘E’ words ever louder and more forcefully until we succeed in compelling dramatic change for the better for England and England’s people and our English Nation!

Another strategic fact which we have always had to contend with is that our Party has been in competition with older more established and richer parties which are also competing for the votes of people who care for their country within England. I mean those people who will be thrilled to see a proud English Nation, Free of the trammels of political correctness and of the EU. Those other parties that have pitched for that vote have been the Conservative Party which has done so by the simple expedient of lying about what they are really about.

Also there is the British National Party, who while they were campaigning with a manifesto in many respects apparently not very different from our own, they have too often been exposed as having some members who sympathise with Nazism, Holocaust denial and White Race Nationalism and whose leadership has managed to loose several million pounds of money raised by the members and supporters, but Ladies and Gentlemen please take note that included in their membership were some people who really just wanted to do their honest best as patriots for their country at a time when no other party was offering a sensible credible alternative.

There is also UKIP which is probably the only really true British traditional patriotric Party on the stage of our politics today. They believe strongly in the 1689 Bill of Rights, with Queen in Parliament as sovereign; The God Save the Queen anthem, the red, white and blue and the Last Night of the Proms vision of British patriotism. I can tell you however that even they recognise that the game is up, for that kind of vision. It has no appeal in Scotland or Wales, only sectarian appeal in Northern Ireland and increasingly little appeal in England.

There was recently an opinion poll which by Com Res which the Independent newspaper rightly pointed out showed that there is less support in England for continuing the Union of the United Kingdom amongst the English than there is in Northern Ireland amongst the Catholics! (48% as opposed to 52%).

Well Ladies and Gentlemen, let me remind you of the famous words which Shakespeare puts in the mouth of Brutus:-

“There is a tide in the affairs of men,
Which, taken at the flood, leads on to fortune;
Omitted, all the voyage of their life
Is bound in shallows and in miseries.
On such a full sea are we now afloat,
And we must take the current when it serves,
Or lose our ventures.”

I suspect over the coming year we will see a continuing and dramatic steep decline in the effectiveness of the British National Party. They were in my view deeply wounded by Nick Griffin’s simply appalling, ineffective and bizarre performance on Question Time. The disappearance of vast amounts of money has led to a breakdown of trust within the Party and a highly corrosive leadership battle, resulting in Nick Griffin apparently scraping home with a majority of a mere 9 over his challenger Andrew Brons (less than the number of spoilt ballots, which were 11), and with a total support of under 1200 votes for either candidate.

The Conservative Party’s coalition with the Liberal Democrats is tending to position them more openly as Europhile corporate globalists interested only in the interests of big business and big government. As I say even UKIP is recognising that their positioning is wrong and is now desperately trying to reposition itself as being more open to Englishness but look likely to be bogged down in another internal conflict over their response between those who are really English nationalists but haven’t realised it yet and those who are British nationalists.

Looking wider afield there is also the issue of Alex Salmond’s outright and historic victory in Scotland which means that he has a free hand in Scotland to make sure that by the time it comes to vote on his proposed Independence referendum, he is in a position to win it. We are still at that stage of the campaign where many people, particularly in England, are complacent as to the outcome and who think that Britishness will continue unaffected.

I also wonder quietly whether we might not find the Argentines retake the Falklands and I wonder what credibility then the fraud of Cameron will have in trying to pretend that Britishness allows us, in the words of the Establishment “to punch above our weight on the world’s stage”!

There is as I mentioned earlier a change in attitude towards our National Identity as to whether people are British or English in England and more and more people are now saying that they feel English not British or more English than British. In this our people are only catching up with the 70% or 80% that would say the equivalent in either Scotland or Wales.

Searchlight, no friend to any patriot, did a detailed study in which they claimed that 48% of people in England would support a political party that called for an English Parliament, celebration of St George’s Day, and an end to mass immigration and withdrawal from the EU. Ladies and Gentlemen, I seem to recognise those policy commitments!

Well, Ladies and Gentlemen, let me tell you that Tony Blair won his last landslide majority with the votes of 21.6% of the electorate. Any party that was able to actually get the votes of 48% of the electorate in a parliamentary democracy would be in government – permanently! That means, even our enemies think that this Party could become a great success and change the very face of politics in our country - but to get there we need to become credible.

I often tell a story of the first time I met Nigel Farrage, in the Bromley by-election where UKIP had spent over £80,000 and drawn in its activists from all over the country and had dropped a dozen or more leaflets in every single household in the constituency and banged on most of the doors. He said to me that he had thought that UKIP was going to do very well until about a week before the election when he spoke to a woman who said to him that she totally supported everything that UKIP stood for and she wanted desperately to get the country out of the EU but she was going to vote for the Liberal Democrat candidate because she thought the Lib Dems had a chance of “getting the Tory out!” Ladies and Gentlemen that is credibility.

That woman was saying that she was not going to vote for the party that she most believed in, she was going to vote for the party whose policies she disagreed with most strongly on the basis that they might be able to win. That is the position that we need to get to and we can only do that by looking dry-eyed and clearly at what opportunities are available for us – and by taking them!

Well one of those opportunities at present is that some of the people who wanted to do their honest best for our country but made the mistake of joining the BNP are now joining us and will help us become that electorally credible party.

We need to be sure that such people are genuine converts to a more civic or cultural nationalism and that they will be an asset to our party but we do not need to be too defensive. We have the best message, we have right on our side and we are England’s best hope. So I say to us here today and to our Party and to the English nation in general, I say, in the words of Percy Bysshe Shelley:- “Rise like Lions after slumber in unvanquishable number, shake your chains to earth like dew, which in sleep had fallen on you – Ye are many – they are few”.
Posted by Robin Tilbrook at 15:24