THE END OF FREEDOM? 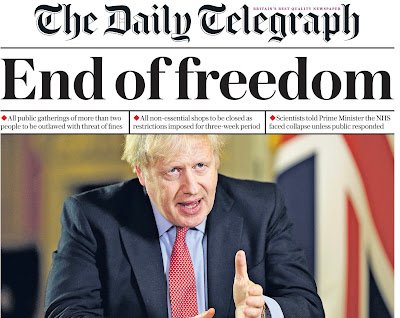 THE END OF FREEDOM

The above was the bold headline in the Daily Telegraph on 24th March 2020.

The Government is now in the process of passing an Enabling Act, every bit as draconian as the one Hitler got passed after the burning of the Reichstag.  This is on the back of the current scare over the Corona Virus pandemic and has been called by the media the “Coronavirus Act”.

Behind all the new rights to make legislation for Ministers, behind the new detention without trial and the end of freedom of assembly and, indeed, the end of the role of Parliament itself, there is also the creeping use of technological surveillance on “citizens”.

There was an article buried where most people would not see it in the Business section of the Sunday Telegraph, which confirms the direction of travel and below that is an article demonstrating what use the Chinese Communist dictatorship has put this technology to use for so far

Does anyone think that, once the Government has got such access, that it will ever be released?

The chief executive of BT, who is recovering from coronavirus, has said the company stands ready to use its technology to help track and manage the outbreak.

In an interview with The Sunday Telegraph, Philip Jansen said BT is working with officials on plans to share data to monitor population movements and on a system of mass communications via smartphones.

He said: “If the Government feels it’s appropriate in the next few weeks we can help understand the flow and dynamics of people as the situation develops.” It is envisaged that mobile operators such as BT could share such insights with officials on how mobile phone users are moving around the country as the pandemic spreads.

The data could be used alongside the latest NHS figures to help decide when and where to tighten or lift restrictions on travel and businesses, for instance.

Mr Jansen, 53, said BT and other mobile operators are also talking to officials about how they could help communicate public health advice. He said: “We are looking at whether we can be a helpful communication vehicle for our 30 million customers.

“There would be push notifications for all mobile customers on all operators.”

The most advanced communications work involves simple mass nationwide text messaging. However, a more advanced “cell broadcast” system that would allow alerts to be targeted to coronavirus hotspots is also under discussion.

Mr Jansen said the BT network is currently coping well with increased demand from people working from home and that he expects to return to the office on Monday.

Here is a link to the original article>>> https://www.telegraph.co.uk/business/2020/03/22/bt-ready-share-data-tracks-peoples-movement/


Here is the earlier article on what the Chinese Government has done:-

China unleashes its surveillance technology to fight coronavirus
From facial recognition to infrared cameras, authorities have deployed a range of technologies – but at what cost?
By Michael Cogley, TECHNOLOGY CORRESPONDENT11 February 2020 • 11:29am

China is the hallmark of the surveillance state – the living experiment of George Orwell’s Big Brother.

The watchful eye of the Chinese government uses a range of technologies to monitor its citizens, ranging from social media monitoring to CCTV cameras boasting facial recognition and thermal tracking.

The cameras can be used to spot people with low-grade fevers while its railway systems can provide a list of people sitting nearby should a patient hop on board a train. Authorities are using the technology to monitor the spread of the deadly virus.

Trading one’s privacy for a safer country is a constant debate. If China can prove its monitoring methods are a force for good in battling something like the coronavirus then it could set the world on course for more widespread adoption.

Facing up to failure
Facial recognition has been deployed in numerous public locations across China, from train stations and airports to hotels and city streets. While it is used in many cases to cull criminal activity it is also vital to everyday life, such as entering gated communities and paying for things.

The technology has hit something of a snag however in its bid to monitor the spread of the virus: surgical masks. The ubiquitous adoption of masks has proven to be a nuisance to those trying to use FaceID to unlock their phones or pay but has also caused Chinese authorities headaches when it comes to tracking its citizens that may have been exposed to the virus.

“The practice of facial surveillance has been enthusiastically embraced in China,” says Jessica Helfand, author of ‘Face: A Visual Odyssey’.

“It is evident in everything from scanners installed in public restrooms in Beijing to catch toilet paper thieves, to a Kentucky Fried Chicken franchise in Hangzhou where you plug into Alibaba’s “smile to pay,” online paywall, to a rise in supermarkets so certain of their surveillant skills that they are increasingly free of clerical staff.”

In some cases faces can be identified despite the obstruction, however much of the time the tech can prove to be useless.
A study from the University of Florence found that the removal of the upper half of the face led to a “more significant” drop in recognition that the bottom half. However, coverage by an item like a mask still led to significant levels of confusion in the software.
Similarly, Huawei’s vice-president Bruce Lee said that the mask-wearing scenario was tested on the company’s Mate 20 Pro.
“The eyes and head have too few feature points to guarantee security,” he said in a post on Chinese social media site Weibo.
“Eventually, the face recognition unlocking in the scene with masks and scarves is abandoned. That’s why we still keep fingerprints on our phones that support 3D face unlock.”

Other technologies
Facial recognition is far from the only technology being deployed by the Chinese to fight the virus. Should a patient suffering from the virus board a train, the railway network’s “real name” system can provide a list of people sitting nearby.

Similarly mobile apps can tell users if they’ve been on a flight or a train with a carrier. Maps can even show the locations of buildings where infected patients live.

Surveillance camera firm Zhejiang Dahua says it can detect fevers with infrared cameras to an accuracy within 0.3ºC.

One such app, the “close contact detector”, tells citizens if they have been near someone who has been confirmed or suspected of having the virus. It was developed alongside the China Electronics Group Corporation and uses data from the country’s health and transport authorities.

The state-run news agency Xinhua reported that users can make an inquiry as to their current condition by scanning a QR code on their phones.

Elsewhere Chinese telecoms providers have quietly tracked the movement of their users. Text messages were sent to Beijing residents this week telling them they could check where they had been over the last 30 days as part of a service offered by China Mobile. Reuters reported that it did not explain why users might need this but that it could be useful if they’re questioned by police.
“In the era of big data and internet, the flow of each person can be clearly seen. So we are different from the SARS time now,” epidemiologist Li Lanjuan said in an interview with China’s state broadcaster CCTV last week, comparing the outbreak to a virus that killed 800 people in 2003.

Deadly killer
More than 43,000 people have been affected by the disease and its spread has continued at a rapid pace. Four more people in the UK have been tested positive for the virus, bringing the total number of infections in England to eight.

The total death toll of the virus is at least 1,016, following the death of another 108 in China people on Sunday.

The unsettling spread of the virus has forced the Chinese government into drastic actions, including the construction of a 1,000-bed facility in Wuhan, where the virus is believed to have originated from.

The ethical question
China’s use of mass surveillance has constantly drawn the ire of privacy advocates, even in scenarios where it is being used to tackle the spread of a deadly virus.

Director of Big Brother Watch Silkie Carlo says the surveillance infrastructure was designed for “population control” and that it could easily be “weaponised against its own people”.

“Facial recognition cameras are reportedly being used to log people's whereabouts and proximity to others, for example on public transport, creating detailed searchable records of exposure to people who might have the virus,” she said.

“China's mass surveillance architecture could have especially sinister consequences in this crisis. This tinderbox for turnkey tyranny should be a warning to every aspiring 'smart' city and surveilled nation in the world, including our own.

Helfand says the surveillance protocols employed by China are “vast” and that this level of people-watching can isolate, label, and stigmatise.

“That a country seeks to contain a viral epidemic is understandable,” she says.

“That cameras embed themselves everywhere to catch us in public seems a different issue entirely, and strikes me as more socially aggressive than clinically wise.”

Here is a link to the original of the article>>>
https://www.telegraph.co.uk/technology/2020/02/11/china-unleashes-surveillance-technology-fight-coronavirus/
Posted by Robin Tilbrook at 14:22