UK to be Python-esque “dead parrot” after Scottish Independence?

The British Establishment’s increasingly desperate support for the idea of the "rest of the UK" (rUK) reminds me of (for the middle aged amongst us) the “dead parrot” sketch from Monty Python. I am reminded of the shop-keeper’s self-interested and ludicrous attempts to persuade his customer that the parrot is healthier than it seems! Here is the 'Python clip >>> 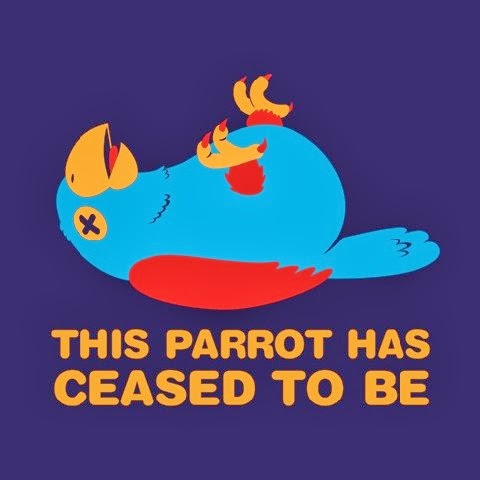 The House of Lords Select Committee on the Constitution, chaired by Jim Callaghan's daughter, Baroness Jay of Paddington. It has called for evidence for an Inquiry into the constitutional implications for the remainder of the United Kingdom in the event of a Yes vote on the 18th September.

The assumptions for the questions are that there will be a constitutional entity called the rUK. My view could be expressed as a mathematical formula:-

Below are my submissions to the Committee. What do you think?

Scottish Independence: Constitutional implications for the rest of the UK

The first point to make crystal clear in the event that Scotland goes independent, and I make this point, not only as the Chairman of the English Democrats, but also as a lawyer and practicing solicitor, that there is no automatically persisting entity known as “the rest of the UK”. This point rests on basic constitutional legal principles and derives from the nature and wording of the Act of Union in 1707. The relevant articles of which are stated as follows:-

THAT THE TWO Kingdoms of England and Scotland shall upon the first Day of May which shall be in the Year one thousand seven hundred and seven, and for ever after, be united into one Kingdom by the name of Great Britain;


It therefore follows, as a matter of trite law, that in the event of Scotland becoming independent this must involve the repeal of the Act of Union 1707. This automatically means that the then new constitutional entity that was created by the Act of Union, namely the “United Kingdom of Great Britain”, will be dissolved. This leads to the automatic dissolution of the Union with Northern Ireland.

The Union with Northern Ireland is the residue deriving from early 20th Century Southern Irish independence of a Union which was created by the Act of Union of 1801 between the Kingdom of Ireland and the United Kingdom of Great Britain.

It follows that without new constitutional legislation the independence of Scotland leads to the dissolution of the “United Kingdom of Great Britain” and of Great Britain’s union with Northern Ireland. It will thus give rise to the re-emergent “Kingdom of Scotland”, the re-emergent “Kingdom of England” and the “Province of Northern Ireland” with no current Union between England or Scotland (or the Republic of Ireland).

It is worth considering the above points carefully because the consequence of Scotland becoming independent isn’t just that Scotland technically would be classified as a new state, under the emerging body of what, for want of a better term, is called “international law”, but also that the Kingdom of England and the Province of Northern Ireland will also all be now States.

The Committee has asked for answers to specific questions.

1. Negotiations – Is the timetable of independence by March 2016 realistic?

Yes, I would have thought it was. It will impose an obligation on negotiators to get on with it promptly.

2. Who will negotiate for the remainder of the UK? To whom would they be accountable?

You will appreciate from my introductory points above, about the nature of the constitutional implications of Scottish independence, that there would not automatically be a single entity which is the remainder of the UK.

It is certainly not appropriate for anyone to purport to negotiate on behalf of England if not expressly and avowedly and legitimately mandated to do so. This will particularly apply to those British politicians who have expressly stated either their hostility to the English nation and/or their Scottish origins, such as David Cameron or William Hague, let alone anyone who is actually of Scottish origin, such as Gordon Brown or Alastair Darling.

The English negotiators should be accountable to the English Nation. It is essential that an English parliament and government be reconstructed quickly in the event of Scotland voting for independence so that there are proper lines of democratic accountability and legitimacy within England.

3. What impact would the timing of the UK general election in May 2015 have on negotiation?

4. What happens if the two negotiating teams cannot reach agreement on an issue?

The answer to this question will, of course will depend on the issue. For instance if the issue was where the boundary between English North Sea oil and Scottish North Sea oil lies, then that could be adjudicated upon by the International Court at the Hague. If it was something that was within the giving of one of the parties but requested by the other, such as a role in the formulation of policy at the Bank of England that will not be capable of adjudication. Clearly the English team could simply refuse and the other team would not be able to insist upon it. If in fact on that item there is such a refusal then I suspect the Scottish negotiators will take the advice of the highly respected international law authority, Professor David Scheffer of the Centre for International Human Rights in Chicago and decline to accept any share of the UK’s debts.

Since all the participants in negotiations will be acting on behalf of potentially “new States” the negotiations are inevitably going to be without hard and fast rules and will be based on give and take. In principle all parties could walk away from the liabilities of the “UK”. So far as assets are concerned, that will either rest on satisfactory negotiations between the parties or will be based on who has physical possession.

6. What are the constitutional implications of maintaining services shared between Scotland and the rest of the UK (for example, the Bank of England and those services listed on page 364 of the Scottish Governments’ White Paper)?

Answer 5 above answers this question.

7. Parliament. What would the position of MPs for Scottish constituencies be from May 2015 to March 2016?

8. What impact would independence have on the House of Commons if MPs for Scottish constituencies left it in March 2016?

Clearly the balance of the parties would be shifted, but the point remains that the House of Commons constitutional position will be altered as Parliament will no longer be the Parliament of the “United Kingdom of Great Britain” but rather only of the Kingdom of England which will also exclude Northern Irish MPs.

9. What impact would independence have on the House of Lords?

The House of Lords is of course currently one of the two Chambers of the Parliament of the “United Kingdom of Great Britain” and Northern Ireland. With the dissolution of the United Kingdom of Great Britain the membership of the House of Lords will be dramatically affected as it will only be appropriate for English peers to sit in the English Upper Chamber. The English Democrats position is that all members of the English Upper Chamber should be democratically elected by the people of England.

10. What legislation (or other measures) would the Westminster have to pass in order for Scotland to become independent?