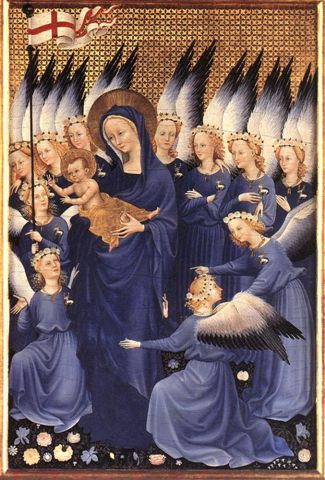 Whilst I would give my best wishes to everyone for a very Merry Christmas and a very Happy New Year, we should not forget that the fight goes on!


Consider this gem from what should be England's National Gallery.


The above image is the nativity panel from the medieval Wilton Diptych. A diptych is a painting, carving or piece of metalwork on two panels, usually hinged like a book. The panels on the Wilton Diptych are made of oak, but have been transformed by immaculate painting and gilding, into a heavenly vision.

The Wilton Diptych was painted as a portable altarpiece for the private devotion of King Richard II, who ruled England from 1377 to 1399. The diptych is thought to have been made in the last five years of Richard’s reign, although the artist remains unknown. It is called The Wilton Diptych because it came from Wilton House in Wiltshire, the sear of the Earls of Pembroke.


The English Democrats served a Race Relations Act Questionnaire and threatened legal action. After our actions, the National Gallery is now selling its cards with the Cross of St George on it. The above is the original image unexpurgated by political correctness!


So if you see or hear of any attempts to belittle our nation even in the small insidious ways don't ignore it! Happy Christmas!