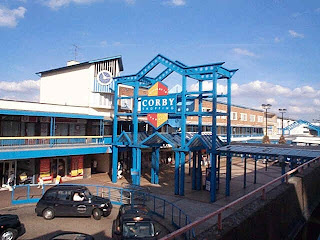 The English Democrats are pleased to announce that David Wickham is our candidate for the Corby and East Northamptonshire By-Election.

David is 43 years old, married and a father of four children. He has lived in Corby for many years, latterly in the Lodge Park area of town and prior to that in Beanfield. David works in Corby for a food manufacturer, and he has worked in that industry for the last two decades.

David is very aware of Corby’s proud manufacturing history and would like to help in reversing the decline. Regrettably most new jobs in Corby are in warehousing and transportation which tend to be low-skilled and do not offer long-term prospects for young people. David believes that Corby must use its traditions to turn itself into a centre of excellence for manufacturing. With such an approach the town and the surrounding area can use the enthusiasm and abilities of local young people to create worthwhile jobs for the future.

David believes strongly in the preserving the United Kingdom, but knows that this can only be done if everyone is treated fairly. It is not right that people in England have to pay University Tuition Fees but in Scotland these are paid by the government. It is not fair that people in England pay for their medical prescriptions but elsewhere in the UK these are free. The United Kingdom can only be preserved in the long term if each of the four countries has their own parliament and pays for their services with the taxes raised in their country. Taxpayers in England cannot go on subsiding services in Scotland, Wales and Northern Ireland which are not available to them. The only way to address this unfairness is for England to have its own parliament and government, the same as in Scotland. We believe in a new political arrangement for the UK, a federation of separately governed countries, or in the current parlance - ‘devo-max’ for all.

David would like to end mass immigration into Britain, which is creating enormous pressure on house building and reducing the chances of young people finding work. He believes that we should adopt an Australian-style ‘points system’ so that we know the people who settle in Britain will be valuable to the economy. David believes that all immigrants must be able to speak English. However the English Democrats know that we cannot control our borders if we remain in EU, so we are in favour of an immediate referendum on our membership of the EU.

David knows that it is the broken promises of politicians, which has lead many people to become disenchanted with politics. The actions of the current MP have merely reinforced this opinion of politicians, that they are merely in it for themselves and that the ethic of public service has been forgotten. The existing Conservative MP claims she cannot balance life as an MP and a mother, but yet she has spent large amounts of the last 2 years building her ‘image’ in the media. Perhaps if she had spent less time in front of the camera and more time with her family then such problems would not have occurred. The people of this constituency have been poorly represented by Louise Mensch, who only seemed interested in her own career. David is promising, if elected, to arrange regular meetings with the voters in the constituency so that he can explain what he is doing and deal with any challenges to his behaviour. David is a local man, who is committed to helping Corby and East Northamptonshire. The English Democrats hope that you will support our campaign to ‘clean-up’ politics and elect genuine people to Parliament, not celebrities or career-politicians.

Key facts about the English Democrats

The English Democrats launched in 2002. The English Democrats are the English nationalist Party which campaigns for a Parliament for England, First Minister and Government, with at least the same powers as the Scottish ones within a Federal UK; for St George’s Day to be England’s National holiday; for Jerusalem to be England’s National Anthem; for a Referendum to leave the EU; for an end to mass immigration; for the Cross of St George to be flown on all public buildings in England.

The English Democrats are England’s answer to the Scottish National Party and Plaid Cymru.

The English Democrats’ greatest electoral successes to date include winning the Directly Elected Executive Mayoralty of Doncaster Metropolitan Borough Council and this year’s referendum; in the 2009 EU election we gained 279,801 votes after a total EU campaign spend of less than £25,000 (giving the English Democrats by far the most cost efficient electoral result of any serious Party in the UK!)
Posted by Robin Tilbrook at 14:16