On Shakespeare's birthday (and St George's day) English nationalism is a rising "tide in the affairs of men". 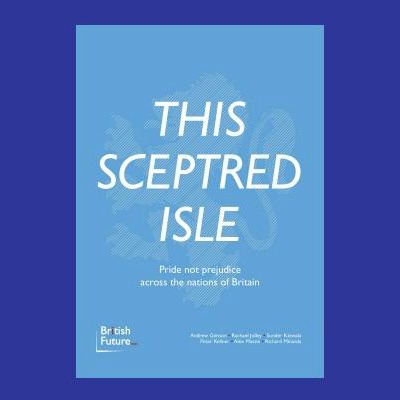 The enemies of what LibDem Charlie Kennedy attacked as the "IDEA of England itself" can see that, in England, English nationalism is Shakespeare's rising "tide in the affairs of men". Rather than take it "at the flood" they would rather try to confuse and dissemble, well knowing that a dishonest "friend" is more dangerous than an open enemy.

Here's the latest article in the Daily Telegraph's "Campaign for Britishness" - which would have been more accurately entitled as 'Threequarters of people in England say St George's Cross is NOT racist'!

The article reports uncritically a "Report" done by "British Future".

British Future's website claims it "is a new independent, non-partisan thinktank seeking to involve people in an open conversation, which addresses people’s hopes and fears about identity and integration, migration and opportunity, so that we feel confident about Britain’s Future.
We want to ensure that we engage those who are anxious about cultural identity and economic opportunity in Britain today, as well as those who already feel confident about our society, so that we can together identify workable solutions to make Britain the country we want to live in."

British Future's Director, Sunder Katwala, is revealed, by a cursory Wikipedia search, as:- " Sunder Katwala is a British political activist and former general secretary of the Fabian Society. He was previously with The Observer newspaper, as a leader writer and internet editor, and was Research Director of The Foreign Policy Centre think-tank from 1999 to 2001. He became Fabian general secretary in October 2003, and held the position until July 2011.

Katwala also writes for The Guardian newspaper, for the Liberal Conspiracy blog, and most regularly for the Fabian blog Next Left.

The Daily Telegraph has included Katwala at number 33 in its list of the '100 most influential left-wingers in British politics."

Given the last paragraph it is hard to accept any proper motive for why this "Report" is given this uncritical treatment by the Telegrpah (with the exception perhaps of sloppy research?)

Here is the Telegraph article:-

"St George’s flag is a racist symbol says a quarter of the English
The English feel far more patriotic about the Union Flag than the St George’s Cross, according to a new poll.

The survey found that while 80 per cent linked the British flag with such feelings, only 61 per cent associated them with English one.

By contrast, the Scottish and the Welsh were far more likely to feel pride in their flag – the St Andrew’s Cross and Red Dragon respectively – than the English in theirs.

The survey was carried out by the think tank British Future as part of a report analysing how people from around the UK view their “national identity”. It will be released tomorrow, on St George’s Day.

The organisation say the results show that more needs to be done to encourage a sense of “English patriotism” if the Union is to survive.

In a letter to The Sunday Telegraph, signed by academics as well as MPs from all major parties, the think tank also calls for the introduction of a new English national anthem to help foster a greater sense of identity at sporting and national occasions.

The organisation, which has also written to the Prime Minister and other party leaders, suggests holding a popular vote to select an anthem such as Jerusalem, Land of Hope and Glory, I Vow to Thee, My Country, or Swing Low, Sweet Chariot, which could be adopted by the English and be used in the same way as Flower of Scotland by the Scots and Land Of My Fathers, by the Welsh.

The report, This Sceptred Isle, shows that only 61 per cent of the English said they associated the St George’s Cross with pride and patriotism, compared to 84 per cent of Scots and 86 per cent of Welsh, when asked about, respectively, the St Andrew’s Cross and the Red Dragon.

Almost a quarter (24 per cent), of the English said they considered their flag to be racist, compared to 10 per cent of Scots and seven per cent of Welsh, when asked about their own flags.

The report blames the “extreme street hooligans of the English Defence League” for “toxifying” the St George’s Cross, although it says politicians should also take responsibility for failing to “speak up for the inclusive patriotism of the English majority”.

It draws a clear parallel with the situation in Scotland and Wales, where civic leaders have done more to “counter rejectionist or exclusive versions of national identity”.

However, by contrast, the English have far more positive associations with the Union flag with 80 per cent linking it to feelings of pride and patriotism, compared with just over a half of Scots (56 per cent) and just over two thirds (68 per cent) of Welsh.

Despite the continuing pride in the Union flag, the report warns that English anxiety over its own flag risks damaging the Union.

It states: “England, the land of Shakespeare, seems uncertain how to find its modern voice. Historically an understated Englishness has been conflated with being British.

"It is ignoring England that now presents a greater threat to the Union than anything else.”

Sunder Katwala, the director of the think tank, said: “We’ve done nothing in the era of devolution to give a voice to England as well as Scotland and Wales, which has left English identity too open to an extremist fringe.

“The EDL with their street yobbery are not the only ones to blame for the unusual anxiety that too many people in England feel about their own flag of St George.

"They share the blame with the politicians who haven’t spoken up for a modern English patriotism, as well as our British identity.

“While the devolution debates in Scotland and Wales appear to have modernised the Scots and Welsh associations with their flag, attitudes to the English flag are lagging behind.”

The poll, conducted in the year of the Queen’s Diamond Jubilee, also show varying levels of support for the monarch.

Eighty per cent of the English said the Queen evoked feelings of pride, compared with 41 per cent of Scots and 35 per cent of Welsh.

The poll was conducted for British Future by YouGov, and involved 2,600 from across the UK.

The relatively new think tank is a non-partisan organisation, with members from across the political spectrum. It is dedicated to investigating the concept of national identity and patriotism in the UK."

I wish everyone a Happy St George's day! I shall be spending part of mine giving evidence to the McKay Commission on WLQ/Devolution! Later I shall be at our St George's Day dinner.
Posted by Robin Tilbrook at 22:06