A surge in support for breaking up the UK - IoS reports

Today there is a significant report in the Independent on Sunday (IoS). It explains why the British Establishment is now panicing so much that they are letting us (and Scottish voters) know some of the benefits which Scots have been getting from England.
Scottish public opinion is moving towards independence with the charge being led by Alex Salmond - a dedicated Scottish nationalist with only Scottish interests at heart and no love of the English.
English public opinion too is moving towards self determination but our allotted champion and potential negotiator is David Robert Donald Cameron. He is on record saying:- "I'm a Cameron, there is quite a lot of Scottish blood flowing through these veins". Cameron has also promised to fight any English person that wants fairness for England. His attack on "sour little Englanders” would not fill any Englishman with confidence about his willingness to fight for our interests. 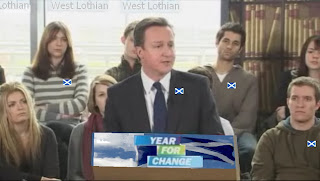 We certainly do not want Cameron and his cronies to once again have an opportunity to betray English interests by giving the Scots an overly generous separation deal.
We urgently need to make a few political adjustments at home before there are any Scottish independence negotiations. We need an English government to look after the interests of England just as Scotland has their own government - a government that can be relied upon to squeeze every penny from the deal!
Here is the report:-

Westminster has no answer to the Alex Salmond effect
As the SNP prepares for its first conference as the sole governing party in Holyrood, support for independence has grown astonishingly. Matt Chorley and Brian Brady report
Sunday, 16 October 2011

Alex Salmond's dream of inching Scotland quietly towards independence is working – and Westminster does not know what to do about it. A significant new poll reveals that since the Scottish National Party won outright control at Holyrood in May, there has been a surge in support for breaking up the union.

With Labour, Tories and Liberal Democrats increasingly panicked by the seemingly inevitable march towards separation, the Scottish National Party will this week unveil plans to augment an "independence generation" in time for a referendum on a split, expected within three years.

According to a ComRes survey for The Independent on Sunday, 39 per cent of people across Britain now say Scotland should be an independent country, up from 33 per cent just five months ago. The rise in support for a split among those polled in Scotland is even more striking, up 11 points from 38 per cent to 49 per cent. Voters in every region of the UK now back Scottish independence.

This change of mood on the state of the union comes as the SNP prepares for its first party conference as Scotland's majority government. Until May, Mr Salmond had led a minority administration, and so could blame other parties for curtailing his ambitions for Scotland.

The IoS poll findings confound strenuous efforts made by the three main parties to repel the SNP surge under Mr Salmond following the shock of his crushing victory at the Scottish parliamentary elections in May. Labour, the Conservatives and the Liberal Democrats had banked on the expectation that even those voters who swept Mr Salmond to an outright majority in Edinburgh did not want full independence.

The two parties in coalition in Westminster have differing views on what to do about the "Salmond problem": the Lib Dems' blueprint for a federal Britain at the last general election pledged to "increase the powers of the Welsh Assembly and Scottish Parliament", but the Tories baldly pledged to "strengthen the union". One Lib Dem cabinet minister bridles at the word "unionist" and insists that "you won't find anyone on our side using that word".

However, in the absence – thus far – of a coherent political or emotional plan to "sell" the union to the Scottish people, the Westminster government has devised a scheme to lay bare the price of going it alone. The new, aggressive approach to the SNP, detailed in The IoS last month, centres on a campaign to drive home the costs of independence to wavering Scottish voters. Ministers have targeted areas where Mr Salmond is seen to be vulnerable, notably on the economy and welfare, for a more rigorous examination of how an independent Scotland would stay afloat – and bankroll its huge pensions and benefits bill without raising taxes.

Ministers in London have seized the opportunity in recent weeks to warn of a looming economic catastrophe. David Mundell, the Scotland Office minister, claimed Scotland would not have survived the banking collapse had it been independent, while Nick Clegg last week said the uncertainty over the referendum was "very unsettling for the business community and [would not do] the Scottish economy any good".

But the most drastic intervention came from Danny Alexander, whose calculations led him to warn of a "catastrophic" £122bn cost of independence. The Chief Secretary to the Treasury told business leaders that Scotland's share of the national debt last year would have been £65bn, while the cost of recapitalising the two major banking groups, RBS and HBOS, would have added a further £57bn to the burden.

That gloomy assessment is inevitably rejected by the SNP, but it has also been questioned by a number of economists. Professor Andrew Hughes-Hallett, of St Andrews University, calculates that, on the basis of income over the last five years, Scotland is a net contributor to the Treasury – and that an independent Scotland would be financially better off.

"If you were to take account of what is spent in Scotland and what is raised in Scotland – and that would include North Sea oil – then in 2008 Scotland was in a mild surplus," he said. "So you could say the subsidy is the other way around. I think critics in England have only one side of the story."

In an attempt to force Mr Salmond on to the back foot, David Cameron and Nick Clegg want MPs in Westminster to agree to block Scottish MPs from voting on English issues before the SNP referendum. The coalition agreement pledges to establish a commission to consider whether to bar MPs from devolved nations from all but UK-wide votes, first raised by Tam Dalyell in the 1970s when he was Labour MP for West Lothian.

A senior Lib Dem source said: "The Government is confident we can get the commission out before Salmond has a referendum, but it is hard to say because Salmond has not been brave enough to come forward about when he will hold it or what the question will be, and he continues to avoid telling the Scottish people what he has planned for their future."

The problem is the three main parties in Holyrood are not in good shape. After each suffered electoral wipeout in May's Scottish elections, their leaders all resigned. Labour and the Tories are still to choose successors, but the extreme suggestion of one Conservative candidate, Murdo Fraser, that his party in Scotland should change its name and cut links to Westminster illustrated the establishment's sense of helplessness in the face of the unstoppable force of Mr Salmond.

The SNP leader continues to call the shots, shaping the debate by offering a third option, a halfway house between the status quo and severing all ties; the so-called "independence lite" option would give Scotland full financial autonomy, while remaining part of the UK.

He is already paving the way for a favourable result in the referendum, confirming plans to open the vote to 16-year-olds. His plans assume younger voters are more inclined to back independence, having grown up with devolution since 1999. His chances of success are underlined by the IoS poll, which shows that backing for independence among 25- to 34-year-olds from across the UK has surged from 31 per cent in May to 42 per cent now. Among 18- to 24-year-olds, there has been an increase from 28 to 32 per cent.

At its conference in Inverness this week, the SNP will detail a steep increase in its membership, which has doubled to almost 19,000 in less than a decade – making the nationalists the biggest party in Scotland. Derek MacKay, the SNP's business convener, said the party wanted to increase membership to 38,000, to shatter "the myth that membership of political parties is falling". He added: "It may be true for other parties but it doesn't apply to the SNP."

Rising membership and a surge in the polls is the holy grail of all politicians. And yet the SNP's resurgence has passed almost unnoticed by most outside Scotland. In Westminster, ministers privately admit to fears that the UK could be "sleepwalking" towards a break-up. Unless they can wake the nation up to the issue, their nightmare could yet come true.

Scotland vs England: subsidies and benefits

Old people
Scotland: Free personal care for all residents of nursing homes.
England: Proposal that anyone with assets worth £35,000 should pay all the costs of their care.

University tuition fees
Scotland: Free – to Scottish students. Holyrood abolished £1,000-per-year tuition fees.
England: Students pay tuition and top-up fees of up to £9,000 a year – and English students at Scottish universities are charged £1,800 for tuition. (this is wrong for next year when English Students will be required to pay up to £9,000 a year to go to Scottish Universities when French students would be free!)

Education maintenance allowances
Scotland: Up to £30 a week
England: £0

Prescription charges
Scotland: Prescription drugs free for the chronically ill from next April. Expected to be free for everyone within four years. (This is also wrong as Scots already have free prescription charges for all and the English Charge is £7.20)
England: £6.85 per item

Transport
Scotland Over-60s travel free on buses; 16- to 18-year-olds get a third off.
England: Off-peak journeys free for over-60s and schoolchildren.

Heating for elderly
Scotland: Central heating installed for all pensioners;
England: Grants available for those on pension credits.

School dinners
Scotland: Free in the first three years of primary school.
England: Poorer children qualify for free meals – but this applies to only 16 per cent of pupils.
Posted by Robin Tilbrook at 16:59