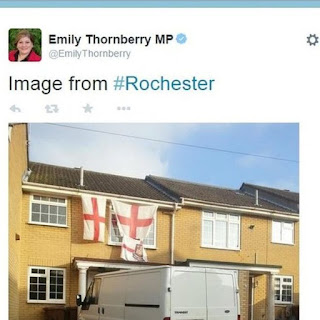 The article below is an important article to read, as it does vividly demonstrate the problem that arises from the fact that the British Political Establishment’s version of official multi-culturalism is at the expense of our English Nation and of our People.  The article shows why we must fight back!


I have taken a small step in that direction by writing to challenge the charitable status of Dulwich and Winchester Colleges for their disgraceful and spineless cowardice in refusing to accept Sir Bryan Thwaites’ bequest for scholarships to their schools.  If they are not even prepared to help in such a way, then they are little more than businesses and should pay tax as such!  My letters are below the article.


Here is the article:-


The lost boys: the white working class is being left behind


These children are the forgotten demographic

You can argue about the merits of pulling down statues, but it’s hard to make the case that mass protests serve no useful purpose. At the very least, they provoke debate and draw attention to uncomfortable topics that it might otherwise be easier to ignore. The recent protests have forced everyone to have difficult discussions about race, class, poverty and attainment. Any serious examination of the statistics shows that we’re pretty far from equal, but what the figures also show is that it’s wrong-headed and damaging to lump very different groups together. In these discussions politicians often lazily assume that all BAME (Black, Asian and Minority Ethnic) people are the same, and that all white groups are equally privileged. But a proper look at the data shows not just that there are striking difference within BAME groups, but that the very worst-performing group of all are white working-class boys — the forgotten demographic.

It might seem divisive to compare different groups, but attainment in education and in life is relative and if we’re to help the worst off, we have to know who they are. We should help everyone who needs it — but it is vital to be able to compare groups to know who’s falling behind, relative to their peers. Bangladeshi-Brits earn 20 per cent less than whites on average, for instance, but those with Indian heritage are likely to earn 12 per cent more. Black Britons on average earn 9 per cent less, but Chinese earn 30 per cent more. What these differences tell us is that employers aren’t systematically discriminating between people on the basis of their skin colour, and that we have to look elsewhere to see the roots of inequality.

Ucas, the university admissions service, can provide unique insight into these issues: it is the only outfit in the world to gather detailed information on all university applicants, including their age, gender, neighbourhood and school type. This is collected along with data on who applied for which courses and who was accepted, and it is renewed in huge detail every year.

Much of the data shows predictable results: there is a gap between rich and poor, as you might expect in a UK state system where the best schools tend to be located in the most expensive areas. But there are surprising discoveries too: nearly half the children eligible for free school meals in inner London go on to higher education, but in the country outside London as a whole it is just 26 per cent.

Black African British children outperform white children, whereas black Caribbean children tend to do worse. Poor Chinese girls (that is to say, those who qualify for free school meals) do better than rich white children. But, interestingly, the ethnic group least likely to get into university are whites. With the sole exception of Gypsy/Roma, every ethnic group attends university at a higher rate than the white British and, of the white British who do attend, most are middle class and 57 per cent are female.  The least likely group to go on to higher education are poor white boys. Just 13 per cent of them go on to higher education, less than any black or Asian group.

This is a trend that can also be seen in the GCSE data; only 17 per cent of white British pupils eligible for free school meals achieve a strong pass in English and maths. Students categorised as Bangladeshi, Black African and Indian are more than twice as likely to do so. In 2007, the state sector saw 23 per cent of black students go on to higher education; this was true for 22 per cent of whites. So about the same. But at the last count, in 2018, the gap had widened to 11 points (41 per cent for black students, 30 per cent for whites). The children of the white working class are falling away from their peers, in danger of becoming lost.

Going to university is not the golden ticket it once was, but it requires stupefying naivety to believe that seven out of eight poor white boys take a sober look at the economics of higher education and choose to set up their own businesses instead. The trail of hard evidence runs cold once they leave school, but the prospects for those who can barely read and write are dreadful and we can get some idea of the consequences by looking at the ‘left behind’ areas where unemployment, crime and ‘deaths of despair’ are significantly higher than the national average.

Angus Deaton, a Nobel Laureate based at Princeton University, came up with the phrase ‘deaths of despair’ when he looked at the demographics of those suffering from alcoholism, depression and drug abuse. Suicides among whites, he found, was soaring and those who took their own lives tended to be poor and low-educated. His recently-published book on the subject (Deaths of Despair and the Future of Capitalism, co-written with Anne Case) tells the devastating story of what he calls ‘the decline of white working-class lives over the last half-century’.

Yet while white working-class males are the largest disadvantaged minority, their cause is the least fashionable. In the intersectional pyramid of victimhood, white males are at the bottom, tarnished by ideas of ‘toxic masculinity’ and ‘white privilege’ despite the fact that in Britain class has always been the most significant indicator of true privilege. It’s worrying, then, that any who attempt ‘positive action’ on behalf of poor white boys face a hostile reaction. Last year, Dulwich and Winchester colleges turned down a bequest of more than £1 million because the donor, Sir Bryan Thwaites, wanted the money ring-fenced for scholarships for white working-class boys. Peter Lampl, founder of the Sutton Trust, a charity whose stated mission is to improve social mobility, described Thwaites’s offer as ‘obnoxious’.

Under the Equality Act, ‘positive discrimination’ remains technically unlawful, but the barely indistinguishable concept of ‘positive action’ is explicitly legal. Firms cannot have quotas, but they can set targets. Employers cannot refuse to look at job applications from people who lack protected characteristics, but by stating that ‘applications are particularly welcome’ from BAME, female or LBGTQ+ candidates they send a message that some need not apply.

In 2016 the BBC pledged that half its workforce and leadership would be female by 2020 despite less than 40 per cent of Britain’s full-time workers being women. It also set an 8 per cent target for LGBT employees, although only around 2 per cent of the population identify as LGBT. This target has been comfortably exceeded, as has been the target of having 15 per cent of employees from a BAME background. In the wake of the Black Lives Matter protests last month, the corporation raised this target to 20 per cent.

The BBC admits that people from ‘low and intermediate income households’ are hugely underrepresented in its workforce. But what does it do about it? Earlier this month Oxford University proudly reported that it was making ‘steady progress’ in its efforts to make its campuses ‘representative of wider society’. Of its most recent intake of British students, only 14 per cent came from the poorest 40 per cent of households.

This fits a pattern: at a push, we can hear acknowledgement of the ‘poor white male’ problem. But that’s as far as it ever goes. The underperformance of white boys and men is not considered to be a problem worth solving. When figures come out showing the stunning attainment gaps between boys and girls, the interest lasts for about a day. ‘It always got a few headlines,’ says Mary Curnock Cook, the former head of Ucas. ‘Where it never got any traction at all was in policy-making in government. I began to think that the subject of white boys is just too difficult for them, given the politicisation of feminism and women’s equality.’

When I asked a teacher why white working-class boys have fallen so far behind, he gave me a short answer: girls are better behaved and immigrant parents are stricter. This is a generalisation but nonetheless interesting: if it is the case that parenting is the problem, then it’s not clear how much the government can do. Perhaps the reluctance to discuss the subject stems from fear that such a discussion would lead to difficult territory about family structure, quality of parenting and — in short — culture. Perhaps politicians think it better to let the problem fester, and the children suffer, than to risk discussing it.

Last month, the government announced that its commission on racial inequality would include an examination into the underperformance of working-class white boys at schools. Will it look deep into the causes? It might look at recent studies that suggest poor reading levels in schools is a huge part of the problem. And it might ask whether ‘positive action’ in the name of diversity has left white working-class boys behind.

Here is a link to the original article >>>


Here are my letters to the Charity Commission:-


It has come to my attention that the above registered charity refused a charitable bequest of more than £1m because the donor, Sir Bryan Thwaites, wanted the money ring-fenced for scholarships for ‘White Working Class Boys’.


I enclose a copy of an article which usefully explains why it is that it is actually white working class boys who particularly need positive action, but at the moment are being denied it by, inter alia, this organisation which benefits from its charity status.  In my view if they are not prepared to act as a charity and accept such a munificent bequest, then they should lose their charitable status.


I am therefore writing formally to request an investigation with a view to sanctioning the above charity.


It has come to my attention that the above registered charity refused a charitable bequest of more than £1m because the donor, Sir Bryan Thwaites, wanted the money ring-fenced for scholarships for ‘White Working Class Boys’.


I enclose a copy of an article which usefully explains why it is that it is actually white working class boys who particularly need positive action, but at the moment are being denied it by, inter alia, this organisation which benefits from its charity status.  In my view if they are not prepared to act as a charity and accept such a munificent bequest, then they should lose their charitable status.


I am therefore writing formally to request an investigation with a view to sanctioning the above charity.