BORIS NAILS HIS COLOURS TO THE MAST? 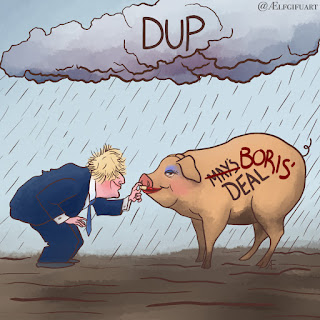 BORIS NAILS HIS COLOURS TO THE MAST?

During the Leadership “Debate” between Boris Johnson and Jeremy Corbyn, a question was asked of them as to whether they preferenced the Union (of the United Kingdom) against Brexit (from the European Union).  Typically for somebody who is really just a footloose Liberal Internationalist (rather than a grounded patriot) Boris claimed that he would preference the Union of the United Kingdom and would drop Brexit.

Not only was this answer very revealing as to his limited attachment to any sort of Brexit, but it was also very revealing about his attitude towards England and English taxpayers.  In the run-up to this Election Campaign he had already committed his Government to giving far more money to Scotland than even the vastly over generous subsidies that it was previously getting under the Barnett Formula.  Naturally for someone like Boris, English taxpayers’ pockets are there to be picked for his personal and political advantage.

I do hope that English taxpayers do remember where Boris’ “loyalties” lie in due course when people wake up to the fact that his “Deal” is the flimsiest Brexit In Name Only (BRINO) rehashing of May’s “Deal”.  It really should be considered to be an abject surrender document!
Posted by Robin Tilbrook at 16:58