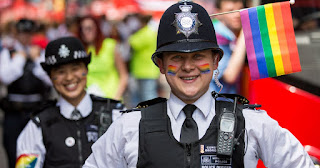 These days we hear lots of complaints in the media about the funding of the police and many calls that we should have more police.


Actually the real issue isn’t the numbers of the police.


Since then we have had an avalanche of legislative verbal diarrhoea from the British State, which has created many thousands of new offences.  The British State is also seeking to interfere in many aspects of English life which in 1960 would have been considered to be no business of the State to interfere in.


There has also been extensive political interference by politically correct British politicians in the way that the English police are allowed to operate.  This has dramatically reduced police effectiveness.


The English criminal courts have also been massively interfered with.  There has been a long period of so called “reform” being imposed by the British Political Establishment at such a rate that new reforms have frequently been imposed before the previous set of reforms have even been properly implemented!


Is it any wonder that now, even though there is now one police officer for every 477 members of the population of England and Wales, that nevertheless their effectiveness in preventing crime is vastly inferior to what it was in 1960?


There is of course also to consider the huge demographic changes that has been engineered in the population of England and Wales since 1960. These have imported forms of criminality from many of the lawless parts of the world.  In 1960 these were unknown in England and Wales.


All in all the statistics about police numbers are a vivid reminder, if any were needed, just how poorly the British Political Establishment has governed our once peaceful and once largely law abiding England over the last 60 years!


Time for a change anyone?
Posted by Robin Tilbrook at 15:16