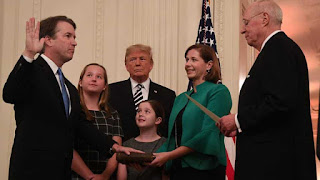 Over the last few weeks we have been “treated” to the all too typical unbalanced and hysterical mis-reporting of any issue which our indigenous Left-wing media types have aligned themselves with - which they do if Left-wing Americans have strong views on any issue.

The latest and in many ways the most appalling example of this was the treatment in America by cynical and manipulative Left-wing “Democrat” Senators, spearheaded by the Senator Feinstein.  They sought, on the flimsiest evidence (which wouldn’t even have got as far as a decision to prosecute from any unbiased and professional prosecutor in any common law jurisdiction), to trash the reputation of Judge Kavanaugh.

It should be borne in mind that this is a Judge who had been serving for many years, with a generally strong professional approval rating, in the second most important appeal court in the United States!

What was proposed by the President Trump therefore was simply a one-step promotion for this Judge.  This is equivalent to promoting a Judge from the Court of Appeal to the Supreme Court. 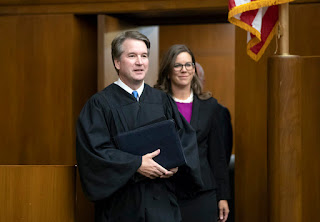 Judge Kavanaugh himself would, 50 years ago, have been thought to be a completely normal and unexceptional candidate to be one of the most important American Judges.

He is not only a well-respected lawyer in practice but also has had an excellent track record as a Judge.  As an individual he appears to be a practicing and principled Roman Catholic, who is happily and faithfully married with children.  These days it seems that being a white, heterosexual, married, professional, Christian family man is unacceptable to the increasingly multiculturalist, Left-wing American party which, with unwitting irony, still calls itself the “Democrats”!

The reason that these Leftists have behaved in the appalling way that they did towards such a decent and respectable candidate wasn’t just that he was nominated by Donald Trump (who of course all Leftists in the United States and those working in the British “mainstream” media loath), but also because Judge Brett Kavanaugh has shown himself to be a lawyer who believes in constitutionalism.  This means that he does not think it is the role of the Supreme Court to invent new rules in order to justify and legitimise current social fashions.  On the contrary Judge Kavanaugh appears to be the sort of Judge who seeks to apply the law accurately and literally.   This doesn’t suit the so-called “Democrats” because they want Judges who will legitimise their increasingly mad rainbow multi-culturalist agenda.

What Donald Trump brought to this fight is something that has not been seen amongst the leaders of so-called conservative parties for many years in the West, which is an iron determination not to be cowed by Leftist smear tactics and indeed to fight back vigorously.

This is a much more gutsy approach than we are used to here.  In this case it has led to a tremendous political victory for Donald Trump and the Republican Party.  They have now established a conservative majority on the Supreme Court which will be of the greatest significance to American politics for many years to come.

These cultural divides are politically crucial nowadays because America’s Constitution has, through decades of Supreme Court rulings, made them the subject of national political debate.  The traditional understanding that the federal Constitution debate underlining, and especially the First Amendment, did not apply to the individual states was overruled in a series of cases between 1925 and 1947.  Since then, virtually every major issue concerning traditional Christian views of morality has been decided via a Supreme Court decision, not by legislation.  As a result cultural questions have been made legislative in a way the drafters of the US Constitution sought to prevent, and so control of the US Supreme Court is thus vital to each side’s interests.

Also President Trump has proved beyond all doubt his usefulness as a dauntless leader of the Republican Party at a time when the appalling behaviour of Democrats has made Republican voters realise how much is at stake in their “Culture War”.

It would be great to see that willingness to fight spilling over across the Atlantic to our people here in England.  Unfortunately what I tend to find is that most people don’t understand what has happened in this fight and what the issues were.

I did however see this YouTube interview which gives an excellent explanation of the situation.

What do you think?
Posted by Robin Tilbrook at 20:07