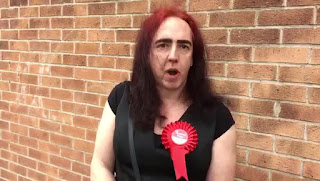 
As various Labour commentators have pointed out, Labour has been moving away from its traditional core support amongst the English “white working class” to instead focussing on its new support amongst the 'Rainbow Alliance' of big city based multi-culturalists and internationalists.


Michael Dugher, who was the MP for Barnsley East, confirmed this in an interview with the New Statesmen in 2015 when he said he was perturbed by Labour’s failure to connect with the white working class population it used to represent, “Working class voters are not core vote anymore – you saw that in Scotland, you saw that in England”.


The New Statesmen also reported that Dugher refers repeatedly to English identity:- “In parts of my constituency, they do fly the flag.  And they are right to be proud of it.  It’s as much about their pride and identity as it is a cry for help”, he says.  “When they fly that flag, they say I am proud of this country, I am proud to be English, I am proud of where I come from; but also, we haven’t gone away, and we deserve a voice, too.”


Interestingly Mr Dugher also said that Labour’s Scottish MPs “wanted to operate in Scotland without any reference at all to the impact on England.  Every time they talked about further devolution, the English and the Labour Party were excluded from that conversation.”


More recently the New Statesman, on the 19th September 2018, in an article headed:-

“How the decline of the working class made Labour a Party of the bourgeois left.  Progressive politics in the 1990s turned away from class politics and solidarity in favour of group identities and self-realisation”

The article written by Professor Jonathan Rutherford makes the same point, in a perhaps more intellectualised way, as follows:-

“The future of British politics will be about the nation state of England, the union of our four nations, and their democratic and economic renewal. It will be about the renascence of the everyday life of work and family. Yet the problem for the left is its domination by an older political generation that lost faith in the idea of the nation, is sceptical about the future of work and doesn’t seem to believe in the family.

Throughout its history, the Labour Party has embodied the paradox of being both radical and conservative, and so it has played a vital role both in maintaining the traditions of the country and shaping its modernity. These dispositions are not party political. They are qualities of mind and character that are woven into the fabric of our English culture. In the words of John Stuart Mill, one demands the uprooting of existing institutions and creeds; the other demands that they be made a reality. One presses new ideas to their utmost consequences; the other reasserts the best meaning and purposes of the old. England’s paradoxical nature is embedded in our constitutional settlement.

Yet with the decline of the industrial working class and the growing influence of a professional middle class, Labour has lost its conservative disposition. Some will claim this is positive: the party is now more left-wing. But this misunderstands the nature of the change. Labour has become a more bourgeois liberal party, and it risks becoming a party in society but not of it.

Over the decades, progressive politics has believed in continuing social improvement and change without end. Its neglect of the human need for belonging – of the value of home and cultural familiarity, and of economic security and social stability – has created a bourgeois left that is deracinated. Its cosmopolitan liberalism and moral relativism have left it poorly equipped to address the questions now confronting its own children about the nature of adulthood, and the meaning and purpose of life, and how we can live it well.


Cosmopolitans believe that their obligations to others should not be confined to fellow national citizens, but extended to include all of humanity. Yet in committing to everyone as part of a universal humanity, we commit to no one and nothing in particular.

Under the influence of this abstraction, progressive and left politics in the 1990s turned away from class politics and solidarity in favour of group identities and self-realisation. It rejected forms of membership that make a claim on people’s loyalty. The particularist loyalties of the nation state and inherited national customs and traditions divided individuals from their shared humanity. Among the more radical, this repudiation extended to their own white English ethnicity. A mix of white guilt and post-colonial politics delegitimised English culture as imperialist and racist, and by default those who value it.

Labour needs to make changes that are deep and far-reaching. It has to break out of its socially liberal heartlands in the public sector and metropolitan areas. It needs to bridge the faultlines dividing both the country and Labour’s own electoral coalition – social liberals vs social conservatives, towns and country vs cities, young vs old, north vs south, England vs Scotland.”

Here is a link to the original article>>> https://www.newstatesman.com/politics/uk/2018/09/how-decline-working-class-made-labour-party-bourgeois-left


These observations on the direction of travel that Labour is headed in are interesting and increasingly obvious when you consider the sort of things which you hear Labour politicians saying and see when Labour activists are filmed.  For instance just look at some of the delegates at their recent conference!


The question that arises of course is whether the growing gap between Labour, as it now is, and the direction it is headed in, will lead to a permanent divorce between it and the traditional English “white working class”?


There is a Labour group which I have mentioned before, founded by the, former Labour Cabinet Minister, John Denham, called the English Labour Network.  They were represented at Labour’s Party Conference and one of their keynote speakers, Hackney Labour Councillor, Polly Billington, was talking about her English identity and “the need to separate Englishness from ethnicity”.


The idea of Labour being able to redefine Englishness in such a way that it was wholly separated from its ethnic heritage is laughable and demonstrates the grave difficulty that Labour would have in trying to bridge the gap.


This is especially so when you factor in that the Labour network and Polly Billington have had a lot of flack from Labour activists.  In effect the Party claimed that it is racist even to mention England and the English!


It is difficult to see how those people could possibly be reconciled to any attempt to represent the interests of English people and of the English nation!


3.17.1 It is common for those who assert their English identity to be challenged in a way that would be considered insulting if directed elsewhere. To avoid misunderstanding, and to meet the demands of those who are hostile to any assertion of Englishness, we have set out below what we mean by the English.

3.17.2 The English can be defined in the same way that other nations are defined. To be English is to be part of a community. We English share a communal history, language and culture. We have a communal identity and memory. We share a 'we' sentiment; a sense of belonging. These things cannot be presented as items on a checklist. Our community, like others, has no easily defined boundaries but we exist, and we have the will to continue to exist.”


Whilst English “ethnicity” is not the only criteria for Englishness, it has the right to be recognised not just from a moral point of view, but also from a legal point of view. Refusal to recognise English ethnicity and to discriminate against people expressing it, or displaying it, is illegal and contrary to the Equalities Act 2010 and other equality legislation;  As the BBC found when it tried to sack an English Rugby reporter from its Scottish team because the Scots didn’t like a sassenach reporting on their rugby!

I refer of course to the ground-breaking case of Mark Souster against BBC Scotland.  This case upheld as embedded in the Law the legal principle that the English are a distinct “racial group” within the UK!


Polly Billington and the English Labour Network are of course applying the classic Fabian doctrine of “Adopt and Adapt”.  I shall be interested to see how they adopt and adapt their way out of the English having the legal right to be recognised as an ethnic group!


So no Polly, Englishness can’t be re-defined into multiculturalism by you or your group or by Labour generally!
Posted by Robin Tilbrook at 21:27