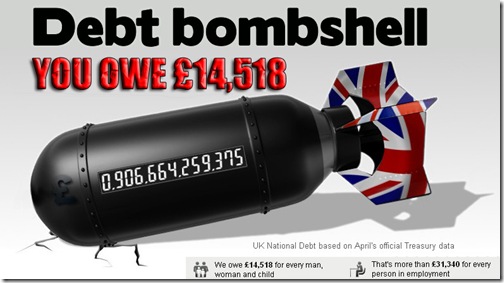 I recently came across the origin of the expression ‘scot free’ which turns out is nothing to do, as I had idly thought, with Scottish reivers (border raiders) getting back across the old border with their ill-gotten gains before they could be brought to face English justice. In fact the origin is as follows:-

'Skat' is a Scandinavian word for tax or payment and the word migrated to England and mutated into 'scot' as the name of a redistributive taxation, levied as early the 10th century as a form of municipal poor relief.

'Scot' as a term for tax has been used since then in various forms - Church scot, Rome scot, Soul scot and so on. Whatever the tax, the phrase 'getting off scot free' simply refers to not paying one's taxes.

It seems that people have been getting off scot free since at least the 11th century. The first written reference in to 'scot free' is in a Writ of Edward the Confessor (who died in 1066!).

This, funnily enough, is a more relevant, if somewhat less amusing, insight into the quoted remarks of Dr Matt Qvortrup http://www.cranfield.ac.uk/cds/staff/qvortrupmmatt.html, which as the report below shows has built on the comments that I reported quite a while back of the North Western constitutional law professor, Professor David Scheffer , who had already pointed out that if the UK Government were trying to insist that they were the successor state and that Scotland was a wholly new state then it logically follows that the Scots could achieve independence without any of the liabilities of the UK. That opinion is now confirmed in this report.

If Alex Salmond deliberately lured Goerge Osborne and Michael Moore on so that he could judo throw them into their own elephant pit, constructed of their own arrogance, ignorance and folly, then this result could not be bettered.

The additional significance of course is that there is a new race on because it is the first of the nations of the UK that get away with being new states that could get out “scot free” from under the massive debts that the profligate and spendthrift British political Establishment have built up for us.
To use another expression ‘what is sauce for the goose is certainly sauce for the gander’, so if Scotland could avoid the debts by becoming a new state so could England.

With over a Trillion pounds (£1000,000,000,000) worth of UK Government debt at issue getting away scot free from the debt mountain sounds quite appealing!

Independence for England anyone?
Here is the article from the Scottish version of the SUN newspaper. Could there be any agenda behind it not appearing in the English version?

SCOTLAND can legally walk away from its share of the UK’s debt mountain and start independence with a clean slate, according to a top constitutional expert.

Lawyer Dr Matt Qvortrup says the nation could begin its life outside the union unshackled from a £125BILLION overdraft — equivalent to four years’ spending at Holyrood.

And the world-renowned academic believes his findings, based on studies of historic state separations, could have a massive impact on the independence debate.

He said: “Imagine — ‘vote Yes and send the bill to David Cameron’.

“Of course I am neutral and just an observer, but the world deserves to know the facts. Personally speaking, I think this could be a game changer.”

Dr Qvortrup’s explosive findings are published in a report that looks at national divorces dating from 1830, when Belgium left the Netherlands, until the break-up of Yugoslavia and the collapse of the Soviet Union in the Nineties.

His research found countries that split equally have historically shared the debts built up during their union. But if one partner continues as before as the ‘successor state’ — keeping its position on international bodies such as the United Nations — it shoulders the debts.

Westminster has already claimed that the remainder of the UK would carry on in that role after a Yes vote in the 2014 independence referendum.

It would hold on to its seat in Europe as well as at the UN and military alliance Nato — while Scotland would have to start from scratch and apply for admission to those bodies.

Dr Qvortrup — an academic at Cranfield University near Swindon, Wilts — said that would reduce Holyrood’s UK balance sheet to zero.

He said: “If Alex Salmond doesn’t want to share the debt and is happy to reapply to Europe, the default position in international law is that Scotland would not have to pick up the debt.

“If you want to be the EU successor state and be in the UN Security Council, you can. You take all the spoils — but you also take the baggage.”

He added: “In Yugoslavia, Serbia Montenegro wanted to be the successor country but they were deemed not to be — which meant they were not landed with the debt. The position Scottish Secretary Michael Moore and Prime Minister David Cameron have is that as long as they are the successor state it’s all good.

“But the understanding about them having to pay the debt could be a good argument for the Yes campaign.

“All other things being equal, Scotland does not have to pay its share of the UK’s debt.”

The findings in the Qvortrup Report tally with the opinion of Professor David Scheffer of the Northwestern University School of Law in Chicago, US.

He believes Westminster’s reading of the post-indy situation is a “bold presumption that rests on very thin ice”.

And he says that negotiating a slice of the UK’s financial burden after a split would give Scotland bargaining power in talks.

However, the Vienna Convention treaty states: “When part of the territory of a state is transferred to another state, the state debt is to be settled by agreement.”

But only eight countries signed up to the convention — and the UK is not one of them.

A report published by Michael Moore in February said that a new Scotland would have to start from scratch as a new country — loaded with 300 years of UK debt. The analysis pointed to “the overwhelming body of international precedent including Irish independence in 1922”. It said: “In the event of independence, the UK would continue and Scotland would form a separate state. There would be an expectation that an independent Scotland would take on an equitable share of national debt, to be negotiated.

“The continuing UK would need to seek to ensure that a fair settlement applied to assets and liabilities.”

Finance Secretary John Swinney has already hinted he could be ready to walk away from the UK’s monetary liabilities if the SNP wins next year’s referendum.

When Chancellor George Osborne visited Scotland last month, he warned that he was unwilling to keep sharing the Pound with Scotland after independence. But Mr Swinney warned he was “playing with fire”.

He said: “The Chancellor argues that the UK would be the successor state, would hold on to the Pound and we couldn’t get access to that.

“If that’s his position, then the UK is obliged as a successor state to hold on to all of the debt.

“We would be liberated from a population share of the UK’s debt of £125billion.”
http://www.thescottishsun.co.uk/scotsol/homepage/scotlandfeatures/4924051/Expert-Scotland-can-legally-leave-the-UK-and-be-debt-free.html
Posted by Robin Tilbrook at 13:58