Let’s have someone who has shown an interest in caring about England as next Archbishop of Canterbury. 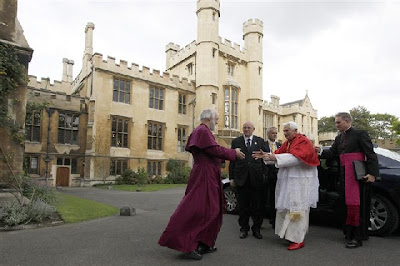 It appears that the Crown Nominations Commission, the consultative body for senior appointments in the Church of England, which is trying to decide who should be the next Archbishop of Canterbury, has been unable to make up its mind whom to recommend and so the decision may well become that of David Cameron.

That is, of course, the Dave Donald Cameron who, when asked whether he was going to do anything about the Barnett Formula subsidy to Scotland, despite representing an English seat, said that he wouldn’t do anything about it because “I am a Cameron and there is quite a lot of Scottish blood flowing in these veins”; the same Cameron who said he didn’t support an English Parliament; the same Cameron who said he didn’t support the English celebrating St George’s Day because “I want to be the Prime Minister of the United Kingdom not just of England”; and the same Cameron who has said “I’ll take on the sour Little Englanders, I’ll fight them all the way” and who heads a political party previously headed by William Hague who said that “English Nationalism is the most dangerous form of all nationalisms”!

In addition it is about as obvious as it can be from David Cameron’s conduct that by no sensible definition can he be described as a sincere Anglican. So all in all David Cameron is the last person that anyone who cares for the Church of England, or, indeed, England itself, would wish to have playing a decisive role in appointing the next Head of the Church of England.

Let us look at the track record of the three leading contenders to be the Head of the Church of England/Archbishop of Canterbury.

The Bishop of Durham, Justin Welby. He has only been appointed as a Bishop for a year and previously has been a French oil company executive.

The Bishop of Norwich, Graham James - sopping wet “Liberal”. Chair of an advisory committee to the BBC. Never said anything that I can find positive about England or Englishness. Opposes the celebration of St George’s Day and is in favour of gay marriage and the ordination of gay clergy.

The Archbishop of York, John Sentamu was born in Uganda. He is the former Lord Chief Justice of Uganda. He was driven out of Uganda by Idi Amin and threatened with death for having the courage to oppose him. Since coming to England he has been increasingly vociferous supporter for the celebration of St George’s Day, recognition of Englishness and the celebration of England’s historic contribution to world culture. Sentamu is a sincere evangelical Christian with a strong commitment to biblically correct Christian doctrine and, having stood up to Idi Amin, is highly unlikely to do the bidding of our relatively toothless politically correct tin-pot British political Establishment.

If you agree with me that John Sentanmu would make the best Head of the Church of England, indeed, Head of the Anglican community world-wide, then please write in support of him to one of the more accessible of the Crown Nominations Commission, Professor Glynn Harrison by email on g.harrison@bristol.ac.uk

Otherwise this important role in the religious, cultural and social life of England will go by default to David Cameron’s preferred option who will inevitably be a shining example of his Englishness loathing mind-set.
Posted by Robin Tilbrook at 22:36