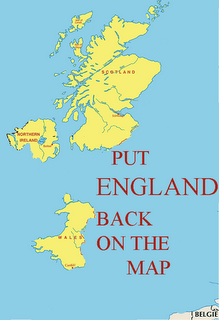 David Cameron has now announced that he proposes/backs a British Constitutional Convention. I reproduce the report from the Daily Telegraph below.

If you ignore the usual Telegraph pure-blind Britishness spin, you can see this proposal could only have come out of sense of increasing anxiety in Westminster and Whitehall that they may yet well be left high and dry by the increasing sense of national identity within the nations that make up the “United Kingdom” and, in particular, the rising sense of national identity in the largest of those nations – the English Nation!

Before going on to read the article below reflect for a moment on William Hague’s comment on the BBC in 2000:- "English nationalism is the most dangerous of all forms of nationalism that can arise within the United Kingdom, because England is five-sixths of the population of the UK....Once a part of a united country or kingdom that is so predominant in size becomes nationalistic, then really the whole thing is under threat." http://news.bbc.co.uk/1/hi/uk/596703.stm

Bearing Hague’s comment in mind, here is the article:-

David Cameron and Ruth Davidson are backing the creation of a body charged with drawing up a new constitutional settlement for the entire UK should Scotland reject independence, the Daily Telegraph can disclose.

It could mean power being transferred from Westminster to the English regions or new restrictions on Scottish MPs voting on domestic English issues.

Miss Davidson, the Scottish Conservative leader, told an inquiry by MPs she supported the creation of a constitutional convention but only if it examined the balance of powers between all four home nations.

Senior Tory sources confirmed the move is backed by Mr Cameron as means of tackling “instability” in the current set-up that can be exploited by Nationalists to stir up tension and acrimony.

The Prime Minister believes that tax powers currently being transferred to Edinburgh under the Scotland Act represents the limits of “bilateral devolution” and any further changes must be considered in the context of the UK as a whole.

The convention will examine where the balance of powers should lie across Westminster, the three devolved administrations and, crucially, England.

This would also mean the Prime Minister honouring a pledge he made in February to consider more powers for Scotland if voters reject separation in the forthcoming referendum.

It is thought the group would start work before Scots go to the polls in autumn 2014 but would not have reported by then. The Liberal Democrats said they backed the move but Labour was sceptical.

Johann Lamont, the Scottish Labour leader, told the MPs devolution is not a “human shield against nationalism” and a further transfer of powers should be considered completely separately from Scotland remaining part of the UK.

However, Tory insiders insisted the convention would be a “safety valve” when Alex Salmond’s separatists challenge the Unionist referendum campaign to spell out which powers will be devolved if voters reject independence.

Unlike the Scottish Constitutional Convention, which was set up in 1988 and helped pave the way for devolution, the group would be founded on a permanent basis so it could consider future calls for the settlement to be changed.

Miss Davidson set out the new policy in evidence yesterday in evidence to the Commons political and constitutional reform select committee, which is investigating the creation of a convention.

Confirming she would support the move, Miss Davidson said: “I think we’ve got to a point where further devolution of some of the things that have been suggested in Scottish public life would then have an impact on the rest of the UK.

“If you are doing something like that, that cannot be a bilateral process. I think you have to bring in all of the parts of the UK to look at what’s going on.”

She cited control over corporation tax, currently being demanded by the Scottish and Northern Irish First Ministers, as an example of a devolved power that would impact on the whole of the UK by setting “one area in competition with others”.

In a written submission to the committee, the Scottish Tory leader said the “starting point” of the new convention would be to set out the “essential characteristics (that) define the unitary state.”

This would include elements such as the monarchy, currency, defence, welfare and BBC, the latter of which Mr Salmond is particularly keen to control in Scotland.

“That established, discussions should move to areas which can be sensibly devolved without harming national unity or political stability and with due regard to our shared history and institutions,” she wrote.

The timing and structure of the new body should take account of the referendum and the new Scotland Act powers, she said, and particularly a new rate of Scottish income tax being introduced in April 2016.

However, Miss Davidson told MPs: “Where I see the big gap is in England because there is a devolved parliament in Scotland, an assembly in Wales and an assembly in Northern Ireland.”

The intervention came despite her promising during the Scottish Tory leadership contest last year that she would draw a “line in the sand” on the constitution by opposing more powers for Holyrood.

This was undermined by Mr Cameron on a visit to Edinburgh earlier this year when he said that he was “open” to examining further devolution after the referendum.

Alex Salmond has since repeatedly challenged the Prime Minister to specify which powers he means, accusing the Unionist referendum campaign to trying to get Scots to buy a “pig in a poke”.

In response, both the Liberal Democrats and Labour have announced commissions examining the devolution settlement, the conclusions of which are expected to form part of their manifestos in the 2015 general election.

http://www.telegraph.co.uk/news/uknews/scotland/9587910/Tories-back-new-UK-constitutional-settlement.html
Posted by Robin Tilbrook at 21:33