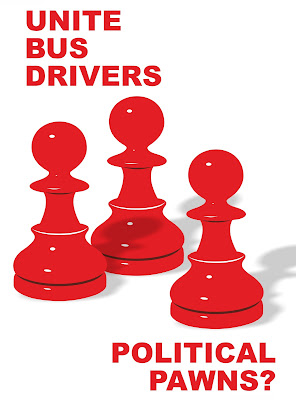 Is McCluskey’s Unite shamefully using London’s bus drivers as political pawns in an attempt to take over the Labour Party?

For Red Len McCluskey the Labour Party leadership ought to consult with Unite before making or changing policy. No longer happy with part funding the Labour Party, the ambitious Unite leader wants to take on a more dominant role politically!

Here is a blog article explaining what is afoot http://labour-uncut.co.uk/2012/06/22/revealed-the-document-that-sets-out-how-unite-intends-to-take-over-the-labour-party/ and here is the Unite’s “strategy” document http://www.scribd.com/doc/97870410/Unite-Political-Strategy.

You would think that Unite’s political ambitions would worry any bus driver contemplating strike action as no one wants to be used as a political pawn especially when striking costs money (over £100 per day) which is needed to pay for family needs and a mortgage!

It is right that London’s Bus Drivers receive an Olympic bonus but questions arise as to why Unite failed to get this implemented 5 years ago.

Red Len’s talk of "reclaiming" the Labour Party should not be his number one concern. The primary purpose of any Trade Union should be to improve the long term working condition and pay of its members. Striking should always be a last resort and focussed on long term improvements to working conditions.

It also appears that Unite were offered £350.00 for each bus driver as an Olympic bonus (TLF and bus company payment) but this was rejected. That means Unite members were duped into striking over a one off payment of £150.00 because they had already been offered £350.00.

Seeing Bus Drivers being used as political pawns for Unite’s now publicly known agenda to run the Labour Party, is of concern.

While Red Len talks about principles he is reportedly paid £150,000 a year! This is classic ‘I’m alright Jack’!

But then maybe he and Unite don’t care about their bus drivers, after all aren’t pawns expendable when you want to take over the Labour Party?
Posted by Robin Tilbrook at 20:06