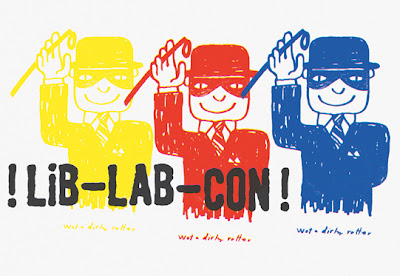 Dear Reader, consider this extract from Esmerelda Weatherwax’s review of a new book about Dewsbury’s politics ‘The Islamic Report of Dewsbury’ by Danny Lockwood’.

Lockwood “had a run in with Baroness Warsi, “sweet, smiling, witty Sayeeda”, as he calls her. He tells how wondering aloud whether to accept the political courtship of the Labour Party or the Conservatives. Both parties could see the value of an articulate educated and ambitious Muslim woman. Her history in the ‘human rights’ field suggested she was left wing, but the Conservatives offered immediate local career openings.”

At first glance you might think that this story (and the many similar ones; eg Chris Patten) confirms just what every grumbler in the corner of the pub says about establishment politicians (to para-phrase!) that they are utterly without any principles.

On reflection though doesn’t it arguably show that the Labour and the Conservative parties are interchangeable? Value free career paths for the personally ambitious?

When you look at the Lib/Lab/Con parties in this light it is no wonder that they are so tweedledee and tweedledum and that political difference is so often about froth and blather minor differences (like Pasty tax) rather than about any great matters of principle?

England needs and deserves a principled renewal of politics - and that needs people to get involved! Will you?
Posted by Robin Tilbrook at 13:54