BBC ABANDONS SELECTION OF EXPERTS BY QUALIFICATION OR BY MERIT! 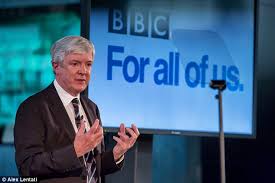 BBC ABANDONS SELECTION OF EXPERTS BY QUALIFICATION OR BY MERIT!

On Bank Holiday Monday the Daily Telegraph ran a story entitled “Half of expert voices on BBC will be female by next year”.

The article appears below but in it the bonkers Lord Hall of Birkenhead (driven mad by obsessive International Leftism and Multi-Culturalism!) announced that he was ordering that there should be a target by April 2019 to have an equal number of male and female expert contributors.

So the outcome of this is that we Licence Fee/Tax payers are to get female contributors, even where all the best experts on a topic are male!

In other words from then on anybody still watching the BBC needs to be very aware that any female expert that they produce may well have been selected, not because she is any good at her area of alleged “expertise”, but simply because she is female.

As if to support my point the article states, no doubt based on the press release by the BBC itself, that the BBC’s “gender quota is … aimed at increasing the opportunities for women on air.  It follows a series of measures including the creation of a “Women’s expert database” to make it easier to book female contributors, and more than a hundred people (sic!) have so far taken part in the “Expert women media training scheme”.”

Needless to say bringing in women expert witnesses is not to affect programmes ““which already have a focus on gender”, such as Woman’s Hour”!

I would be very interested to know whether equivalent rules are to be applied to the BBC’s Asian Network.  In particular it would be amusing to see the contortions which the politically correct apologists for the BBC will be put to to explain why they haven’t got a 50/50 gender balance of Sharia Law experts.

Naturally pointing out such issues and being at all critical of them is a breach of the UK Government's “fundamental British values” which insists upon acceptance of multi-culturalism and also of all its madnesses (and of its opposition to many traditional English values) as a pre-condition of acceptability!

“BBC pledges to have 50:50 gender split of expert voices by April next year

The BBC is to insist half of the expert voices heard on news and current affairs programmes are women by next year, it has been announced.
The broadcaster has set a 50:50 gender quota after it came under pressure over its treatment of female staff.
By April 2019, the corporation aims to have an equal number of male and female expert contributors to topical shows, as it increases the number of women on air.
Lord Hall of Birkenhead, the director-general, said the target would “help transform the range of expert voices across the BBC”.
Director of news  Fran Unsworth said change must move “further and faster”, pledging the organisation will produce a report to be accountable on its progress.
Earlier this year, the BBC faced accusations of being a “good old boy’s network” after allegations of its treatment of female broadcasters  including Carrie Gracie.
The gender quota is now aimed at increasing the opportunities for women on air, ensuring a range of voices are heard.
It follows a series of measures including, in 2013, the creation of a “women’s expert database” to make it easier for programme-makers to find and book female contributors for television and radio.
More than 100 people have so far taken part in an “expert women” scheme, for free media training sessions to boost confidence and performance.
The quota relates only to contributing “experts”, brought in to give insight and opinion on topical stories.
It does not include “the relevant minister, official, or organisational representative appropriate” to that news story, meaning those responsible for whatever has happened remain accountable regardless of gender.
It also rules out programmes “which already have a focus on gender”, such as Woman’s Hour, which “would not be expected to achieve a 50:50 balance because of the very nature of the programme’s editorial remit”.
Since last year, select programmes have trialled a grassroots 50:50 project, with Outside Source, a show simulcast on the BBC News Channel and BBC World News, reaching the target within three months of paying close attention to guests’ gender.
The BBC said the success of the 50:50 challenge has led to other teams to follow suit. The One Show and BBC News at Six and Ten are the latest of more than 80 programmes to sign up.
The corporation claimed “many programmes have seen uplift in gender balance since recording their figures”, with The Andrew Marr show on BBC One and Radio 4’s File on 4 each seeing a rise in expert female contributors and reporters. The former has seen an increase from 42 per cent in December to 52 per cent in February.
Lord Hall said:  “This is a fantastic project that is already driving change. The results from programmes that have taken it up have been remarkable.
“Adopting it more widely will help transform the range of expert voices across the BBC.”
Fran Unsworth, BBC Director of News, added: “We are starting to see a real transformation across the BBC. But we want to go further and faster.
“The success already delivered demonstrates the desire and commitment of BBC teams to lead the way on this important issue.
“That’s why, the BBC is now setting the challenge of all programmes – on both radio and TV – that use expert contributors, to meet a 50/50 split of contributors by April 2019.
“The BBC will produce report on the progress at that time.  We can and are delivering change.
“The BBC is happy to share its experience of this project with other broadcasters and news organisations who might want to adopt a similar approach.”
Posted by Robin Tilbrook at 11:25