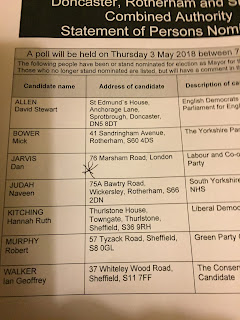 Our PRESS RELEASE about the South Yorkshire Mayoral Election:-
Dan Jarvis uses two dodgy addresses in standing as Sheffield Mayoral Candidate
In the Statement of Persons Nominated as a candidate in the election, Dan Jarvis has the non-existent address in London of 76 Marsham Road.  No postcode is provided.  Whereas there is a 76 Marsham Road in Kings Heath, Birmingham, there is none in London.
It therefore seems that on his nomination paper Mr Jarvis has made a declaration that his address is 76 Marsham Road, London - clearly a false declaration and so it seems that he has committed an electoral fraud, which upon conviction would probably get him disqualified from holding elected office, not only as Mayor, but also as an MP!
Here is the Electoral Commission Guidance set out in:-
Guidance for candidates and agents Part 2b of 6 – Standing as a party candidate.  April 2017 (updated December 2017.
The relevant part of the Guidance states:-
“Home address form 1.12
The home address form must state your home address in full. If you do not want your address to be made public and to appear on the ballot paper, you must make a statement to this effect on the home address form and give the name of the constituency in which your home address is situated or, if you
live outside the UK, the name of the country in which you reside.
1.13
Your home address:
• must be completed in full
• must not contain abbreviations
• must be your current home address
• must not be a business address (unless you run a business from your home)
1.14
Your address does not need to be in the constituency in which you intend to stand.”
76 Marsham Street, London SW1P 4DR does however exist and that is Great Minster House which is a Barrett luxury development whose website address can be found here >>>https://www.barratthomes.co.uk/new-homes/greater-london/h634701-great-minster-house/.  This is a new development in which Right Move shows that a 2 bedroomed flat is currently for sale at £2,650,000! (Click here >>> http://www.rightmove.co.uk/property-for-sale/property-48448119.html. 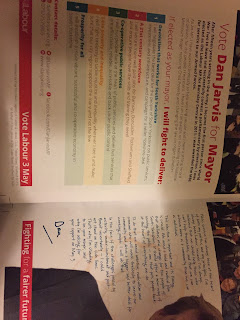 Also in the Mayoral Booklet for Election Addresses Mr Jarvis has given his address as 200 Duke Street, S2 5QQ, Sheffield, which is not only not a residential address but is also not really a proper address at all.  It is actually the side of the Labour Party’s Sheffield office!
The proper address of Labour’s office is given by Mr Jarvis’ Election Agent, Mr Paul Nicholson, who gives his address as the proper address Labour’s Sheffield Headquarters of Talbot Street, S2 2TG.
So the two addresses that Mr Jarvis has given in his paperwork for this important election are both addresses that he neither lives at nor works at!
In the Stoke By-election Labour said:-  “Mr Nuttall’s use of an empty house as his address raised questions about his fitness for public office”!
The English Democrats take the view that if Labour felt that it was proper to report Mr Nuttall to the Police when the address given by him was both a real one and one which he presumably had leased then in this worse case the matter should be reported to the police and so we have done so as is confirmed by the quotation that is the title to this article.
David Allen, the English Democrats’ candidate for the South Yorkshire Mayoral Election said:-
“I always knew that Dan Jarvis MP was a Notts man with no real connections with Yorkshire at all, but now it appears that he cannot even give a proper address for his candidacy.
This can only mislead electors in South Yorkshire into wrongly thinking that Dan Jarvis is someone with roots here in Yorkshire.”
David continued:-
“Furthermore if Dan Jarvis has committed an electoral fraud offence then it could be a wasted vote for Labour supporters to vote for him when he could soon be disqualified.
The honourable thing for Mr Jarvis to do now would be to stand down from this election.  If he follows this advice it will be interesting to see whom he recommends his supporters to vote for.  I suspect it will be the equally anti-English Regionalist Yorkshire Party, which, just like Dan Jarvis, is not campaigning for the traditional Yorkshire at all, but for the EU Yorkshire & Humber Region which excludes parts of traditional Yorkshire and includes parts of traditional North Lincolnshire and whose main effect is to begin the break-up of England”
David Allen
Email: Davidsallen64@gmail.com
Robin Tilbrook
Chairman,
The English Democrats