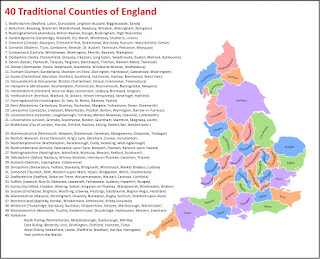 Regionalisation exposed by the CEP as a devious EU tactic to destabilise the UK (& England!)

Many thanks to the Campaign for an English Parliament for this intel:-

"Many initial responses to hearing that there is a Yorkshire independence movement and a Yorkshire Party is to pour scorn on the idea as being fiscally irresponsible or plainly unworkable. This is because it is obvious that without the British government’s subsidies Yorkshire Services wouldn't function properly.

However, to simply dismiss these two organisations that have the same Liberal Democrat leadership is to underestimate the manipulation and the devious actions of the EU in supporting a new sounding name for the old EU Regionalisation project for Britain and for England. http://www.e-f-a.org/about-us/

First it is important for any patriots to realise that the EU is supporting the Yorkshire Party as it belongs to an EU umbrella organisation, called the European Free Alliance (EFA). That EU organisation gathers together 45 “Progressive nationalist, regionalist and autonomist” parties throughout Europe. This grouping can only be conceived as an EU attempt to break-up and digest those nations that the regionalist organisations work within. This is because the EU supports the Regionalisation agenda because it makes resistance to their EU federalism agenda difficult if the nation state is fighting on two fronts. (the EU commission and EU supporting regionalist voices within).

The structure in Catalonia and Spain is a good example showing how devious the EU truly is:- The EU has openly distanced itself from those Catalonian parties that have called for full independence but it fails to mention that some of these parties are also included in their EU, European Free Alliance organisation. In effect, they are funded encouraging Regionalisation behind the scenes but are publicly slapping down independence. That is because the regionalist within the nation state is an EU regionalist patsy!

Once you accept that Regionalisation is all about pushing the EU Federalist agenda then you realise that The Yorkshire Party is not about benefiting the people of Yorkshire but about promoting EU federalism. This makes the Yorkshire party dangerous because it is about creating internal divisions and arguments within England and the UK whilst the British Government are engaged in full Brexit negotiations.

This is not new and any person should be able to see the 4 EU stages that have and are being attempted to create destabilise the UK:-

(1) Under the Blair Labour government the EU promoted regionalisation of the UK and of England but the idea failed to gain any momentum in England and they lost at the ballot box in the North East of England. (You only need to look at the EU zealot, Tony Blair's current EU stance to realise what his regionalist agenda was not about better governance. It was about destabilising the UK for EU advantage by creating a Welsh Assembly, a Scottish Parliament, and a Northern Irish Assembly and English Regional Assembly*). https://en.wikipedia.org/wiki/European_Free_Alliance#Full_members

(2) Thus with Tony Blair’s help the EU had been successful in creating an unbalanced constitutional situation. Having created Regional Parliaments that could challenge the British government, the EU began to focus more on England. They started to support the term 'Localism' which really meant Regionalisation of England. If you break England up into EU Regions then you really have created an internal political and constitutional crisis for the UK.

Initially, it was Mebyon Kernow, the Cornish nationalists getting far more pro-EU media exposure than the actual support for their party would have commanded and now it's the turn of the Yorkshire Party to be promoted. http://www.yorkpress.co.uk/news/15787239.Councillors_vote_to_back_devolution_move/ http://www.bbc.co.uk/news/live/uk-england-leeds-42427906 ;

(3) Now we need to look forward to 2018, having helped establish the idea that Yorkshire can stand alone as a Region within the EU, they could allow the Yorkshire party to push for their own parliament with more fiscal autonomy and claim that Yorkshire doesn't have any connection with the south of England and that the British Government has no more right to speak for them than for Scotland. http://www.yorkshireparty.org.uk

(4) Then Yorkshire Party will demand the same powers as Scotland and it's own independence referendum which states it wants to remain in the EU!
https://en-gb.facebook.com/voteyorkshire/

To fully corroborate the Regionalist agenda it is worth noting that the Leader of the Yorkshire Party, Stewart Arnold, was previously a liberal Democrat Councillor and Parliamentary candidate and he also worked as a Policy and Communications Director for the European Parliament between 2001 -2012. Mr Arnold was involved in establishing the “Yorkshire Independence Movement” and is its Vice Chairman as well as becoming the Yorkshire Party’s as its leader. Also added to this is Nigel Sollitt’s comments as, The Yorkshire Independence Movement’s Chairman, states that their aim is:- 'a Yorkshire empowered to make her own decisions and determine her own destiny'. https://yorkshiredevolution.co.uk/current-executive-committee.html

Regionalisation is a process that the EU uses to promote its Federalist policy, if English Regionalism is encouraged then “dissolution” of the UK will occur. This puts the EU Regionalist party, Yorkshire party in direct opposition to the British government and the British State itself as well as in opposition to the continuance of the United Kingdom of Great Britain and Northern Ireland!"