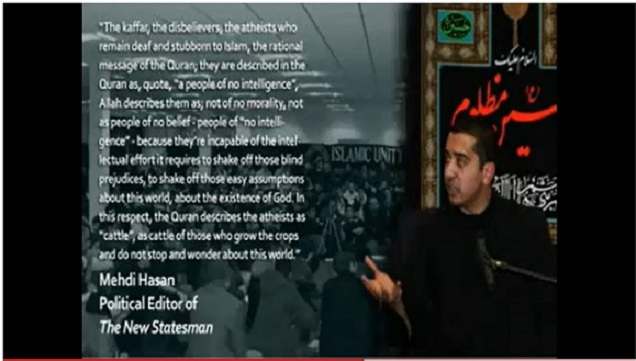 I have sometimes been asked if Muslims have actually asked for special legal treatment.  The Article below is an example of an influential Muslim doing so but it is quite subtle.

The article is from the “Huffington Post” an online news agency well known in America for its Left/Liberal bias but in the ‘UK’ its political editor is the BBC's favourite Leftist/Islamist, Mehdi Hasan, who seems here to be giving his views on us infidels.  Click here >>> Mehdi Hasan - Non Muslims live like animals - YouTube and here he is talking about the Shiite Islamic equivalent of Judas in which he seems to demonise gays >>> ?MehdiHasanYazidHomoKaffir - YouTube.  If the "hate crime" law was equally applied I would have expected Mr Hasan to have been at least considered for prosecution over these comments, wouldn't you?

It should therefore not be surprising that this Leftist online news outlet edited by an Islamist is vocal in its support of the ‘UK’s’ “Islamic Community”(sic!).

As journalists often do, Mehdi weaves into his story a source that he approves of  “Tell Mama” but which has been exposed as being just as unreliable a source as he is himself! For revelations about “Tell Mama” and its leader who is quoted so approvingly by Mehdi Hassan, click here >>>The truth about the 'wave of attacks on Muslims’ after Woolwich murder - Telegraph

The thrust of Mehdi's article is that “Hate Crime” against Muslims should be punished with especially severe criminal sanctions.

Actually such “hate crime” already is treated more severely than anyone applying ordinary common sense, or indeed ordinary legal principles, would think appropriate if, but only if, it is committed by English people against any other ethnic minority group or individual.  Also consider the BBC's reaction to criticism over a more significant, deliberate and calculated blasphemy against Jesus Christ >>> http://news.bbc.co.uk/1/hi/entertainment/7128552.stm.

It should also be borne in mind that “hate crime” can often mean merely a rude remark rather than any sort of violent attack.

In my view the old playground adage of “sticks and stone may break my bones but words will never hurt me!” should be the start point for any contemplated prosecution (or conviction) for, often trivial, rudeness.

However, if that rudeness spills over into physical aggression or threats of violence, then of course I would support punishment but focussed only on what has actually happened not as a result of a sort of witch trial, otherwise it is the State itself which becomes the instrument of victimisation!  (No doubt to the pleasure of people like Mehdi Hasan)!

What do you think? (Note the startling, but no doubt deliberate, confusion of a building with people and the extent of the group allegedly "targeted" in "When you target a mosque, you are targeting the whole community.")


Hate crimes against Muslims have soared in 2013, new figures have shown. Hundreds of anti-Muslim offences have been carried out across the country in 2013, with Britain's biggest force, the Metropolitan police, recording 500 Islamophobic crimes alone.


Many forces reported a surge in the number of anti-Muslim hate crimes following the murder of soldier Lee Rigby by two Islamic extremists in Woolwich, south-east London. And it is feared the figures could be much higher after nearly half of the 43 forces in England and Wales did not reveal how many hate crimes had targeted Muslims - with some forces admitting they do not always record the faith of a religious hate crime victim.


Freedom of Information requests were sent by the Press Association to every police force in England and Wales. Of the 43 forces, 24 provided figures on the number of anti-Muslim crimes and incidents recorded. Tell Mama, a group which monitors anti-Muslim incidents, said it had dealt with some 840 cases since April - with the number expected to rise to more than 1,000 by the end of March.


This compared with 582 anti-Muslim cases it dealt with from March 2012 to March 2013. Fiyaz Mujhal, director of Faith Matters, which runs the Tell Mama project, said reaction to the murder of Fusilier Rigby had caused the number of Islamophobic crimes to "significantly jump". He added: "The far right groups, particularly the EDL (English Defence League) perniciously use the internet and social media to promote vast amounts of online hate."


Mujhal said tougher sentencing was needed to tackle Islamophobic crime and branded guidelines by the Crown Prosecution Service (CPS) to monitor social media as "not fit for purpose". He said: "They raised the bar of prosecution significantly. Now unless there is a direct threat to somebody on Twitter or Facebook, the CPS will not prosecute. The CPS is just plainly out of sync with reality.


"We also need more robust sentencing. In one case, a pig's head was left outside a mosque and the perpetrator came away with a community sentence. When you target a mosque, you are targeting the whole community."


Tell Mama has called for police forces to introduce a system which improves monitoring of Islamophobic crimes, after some forces admitted officers do not always record the faith of a religious hate crime victim.
"There are three problems we come across," Mujhal said. "Firstly, there is a lack of understanding of the language of Islamophobia thrown at victims in any incidents. Secondly, there is very little training on how to ask relevant questions to pull out anti-Muslim cases. Thirdly, recording processes are not in line with each other. One force will allow an officer to flag an incident as anti-Muslim, another force will flag it as religious hate crime. There is no uniformity. There must be guidelines for all forces so we can know the level of the problem."


The Association of Chief Police Officers (Acpo) has previously said 71 incidents were reported to its national community tension team (NCTT) over five days after Fusilier Rigby was murdered on May 22. Superintendent Paul Giannasi, Acpo's spokesman on hate crime, said: "The police service is committed to reducing the harm caused by hate crime and it is vital that we encourage more victims who suffer crimes to report them to the police or through third party reporting facilities such as Tell Mama.


"Acpo has played a key role in improving reporting mechanisms, including through the development of our True Vision website (www.report-it.org.uk). This provides information to victims and allows people to report online. We would obviously want overall crime levels to reduce and to see fewer victims, but we welcome increases in reported hate crime, as long as they are a sign of increased confidence of victims to report. We are working with local police forces, to help improve the way we respond to hate crime and to provide robust and transparent hate crime data."


A Ministry of Justice spokesman said: "These are despicable crimes that devastate lives and communities. The courts already hand out tougher punishments where race or religion are found to be aggravating factors. The number of people receiving a custodial sentence for these appalling crimes is higher than ever before."


A CPS spokeswoman said: "Online communication can be offensive, shocking or in bad taste. However, as set out in CPS guidelines on prosecuting cases involving communications sent via social media, content has to be more than simply offensive to be contrary to the criminal law. In order to preserve the right to free speech the threshold for prosecution must be high and only communications that are grossly offensive, indecent, obscene or false are prohibited by the legislation."

(Here is the link to the original article >>>Hate Crimes Against Muslims Soar After Woolwich Murder Of Lee Rigby)
Posted by Robin Tilbrook at 18:12