My speech to the English Democrats’ Conference on 21st September 2019 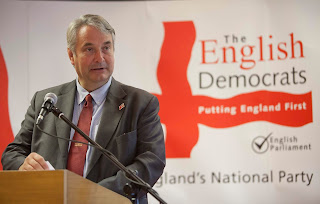 My speech to the English Democrats’ Conference on 21st September 2019

This is an extract from my speech to the English Democrats’ Conference on 21st September 2019:-

Ladies and Gentlemen, welcome to our conference in Leicester.

Leicester is now in the geographical heart of England but once it was not.  Once it was one of the five boroughs from which the pagan Viking invaders ruled this part of what is now England.

Leicester had been part of the English Kingdom of Mercia but in 918 AD it was at the forefront of the English fightback when it fell to Æthelflæd, the famous “Lady of the Mercians”, who was the daughter of Alfred the Great and the Aunt of Athelstan, the grandson of Alfred who was to go on to unite England on the 12th July 927 AD.

So here we are, Ladies and Gentlemen, in Leicester at the start of another English fightback!

In July many of us were in Malmsbury, where King Athelstan is buried, to support an initiative aiming to get the anniversary of United England’s birth fully celebrated before we reach United England’s eleven hundredth birthday on the 12th July 2027!

As English Nationalists we should remember and treasure our Nation’s long and unique history and remember that the fightback that created a United England was a long and bloody fight against a fierce and dangerous Viking enemy who were afterwards absorbed into and became part of our modern English Nation.

Let me tell you a story.  Once upon a time there was a land in which we thought that the BBC and the newspapers mainly told us the truth but they were perhaps a bit inefficient and they got things wrong or missed out important information by mistake.  We thought that our politicians were basically on our side but were a bit out of touch, but if we communicated with them better, then good old “they” would sort it all out and then everything would be tickety-boo in the garden!

Ladies and Gentlemen I say to you that is no longer this land!  That is a land of lost contentment!

In this new land we all now know that most of the media lie to us – they are barefaced and shameless liars and deceivers with their own globalist, multiculturalist agenda in which they hope that all those who disagree with them will die out!

Now we know that many of our British Establishment politicians are not just a slightly eccentric Lib/Lab/Con.  No!  They are out and out enemies of all our traditions and enemies of our very nation.

This is a political elite that is so opposed to our Nation’s basic values that a so-called “Conservative” education Minister recently made it a crime for parents to stop their 6 year old children from having compulsory sex education lessons on “transgenderism”.

This is a political elite which has been exposed as mostly made up of people who lied about their politics in order to get elected and then they pursued their own ideological agenda whilst sneering at the poor fools who were duped into electing them!

And its not only the media and the politicians who have been unmasked by Brexit as contemptuous of our peoples’ views and of our democratic votes but also the courts and Big Business and Big Trade Unions!

Ladies and Gentlemen what does this all add up to?

Well I say, on the upside, that there will never be such an opportunity again for our politics to be fundamentally changed for the better.  Our peoples’ anger is ready to boil over!  And I say - rightly so!

We have been misled, we have been lied to and we have all been duped for far too long!

Let’s work together to begin the English fightback and let’s together get our country back!