“EVEL” PROVED NOT TO BE EVIL BUT MERELY USELESS! 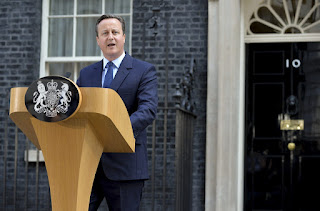 “EVEL” PROVED NOT TO BE EVIL BUT MERELY USELESS!

Remember when David Cameron’s announced in Downing Street, after the Scottish Referendum, that he thought that we now needed to give a voice to England?  He proposed that the voting system in the House of Commons should be reformed to provide English votes for English laws ("EVEL").


Labour howled that this would lead to disaster but our view was just that it wouldn’t prove to be an answer to the English Question.  In particular we thought then it wouldn’t even be an attempted answer to the question of how the Executive operates.  This is because there would be no English First Minister or English Government or even a Secretary of State for England!


Also it was always going to be unlikely that any such minor reforms to the House of Commons would change the fact that the people that get elected as Labour MPs or Conservative MPs are usually people who not only don’t care for England and do not identify themselves as being English.  In fact they often outright hate England!  For an example of this consider the infamous words of the former Leader of the Liberal Democrats, the late Charles Kennedy, who said that he supported the Regionalisation of England because Regionalisation “Was calling into question the very idea of England itself”!


We thought how is it going to be possible for such people to ever give a proper voice to England?


Now there has been an academic study done by a Left-wing, Cambridge University Politics Department, academic.  Professor Michael Kelly is certainly no friend to English nationalism. However his report is worth reading and a link to it can be found here>>> https://academic.oup.com/pa/advance-article/doi/10.1093/pa/gsy003/4868636


The extracts of the study that I particularly relished in their vindication of the English Democrats’ positions were as follows:-


“In the light of prime minister David Cameron’s assertion in September 2014 that EVEL would constitute a ‘decisive answer’ to the West Lothian Question that would enable the ‘voices of England [to] be heard’ (Cameron, 2014), and given the level of disagreement which these procedures have elicited at Westminster, the effectiveness and implications of this historic reform demand more careful assessment than they have hitherto received.”


“More significant objections to EVEL, however, concerned its potential constitutional implications. Some contended that this kind of reform would be inherently incompatible with the ethos of a body tasked with managing the legislative affairs of the UK as a whole, by creating different classes of MPs with different rights. As Bryant (2008, p. 674) noted, ‘[t]he standard objection to it is that it would create two classes of MPs … and in so doing it would run counter to the sovereignty of parliament exercised equally by all who are elected to it’.”


“For others, however, devolution to some parts of the UK, but not to England, has embedded an endemic unfairness and helped put the English Question back at the heart of British politics—a view that has been loudly championed by proponents of the idea of an English parliament.”

“With respect to the various practical obstacles that have been feared by sceptics, the evidence derived from the 2015–2017 parliament suggests that these pessimistic predictions have not thus far been realised.”

“We nevertheless found little evidence that the Commons authorities were unduly burdened in this period by the requirement to make adjudications. This is an important observation because it tends to undermine the common claim that it is not practical to identify England-only legislation.”

“The worry that EVEL might create ‘two classes’ of MPs was widely echoed in the debate about these procedures which took place in the House during 2015, and this became a standard complaint among some MPs—particularly on the question of the so-called ‘Barnett consequentials’ of legislation that appeared mainly to affect England. During these debates it was argued that the new procedures would establish ‘two classes of Members of Parliament’, ‘second-class MPs’, or even make some MPs ‘fourth-class’. This complaint also figured in a wider public debate about EVEL which took place in Scotland in 2015, and in a much more limited way in England.”

“The government possesses various mechanisms within the pre-existing procedures of the House of Commons to manage legislative business, including control over parliamentary time and the exclusive power to initiate taxation and spending provisions. Such tools mean that the possibility of an opposition party with a majority in England effectively displacing the UK government on England-only matters remains remote, at least as a direct consequence of these procedures.”

“It remains possible for England-only legislation not to be certified under EVEL. This is illustrated by government proposals to relax Sunday trading rules through the Enterprise Bill in 2016. Although this policy would only have applied in England and Wales, the Speaker’s provisional certificate confirmed that it did not meet the certification tests. This was because the relevant clause also contained material relating to employment rights in Scotland.

Under EVEL, however, whole clauses are considered for certification, not components within them. This episode demonstrates rather well that, should ministers in future wish to circumvent the veto right provided by EVEL, there is every chance that this could be relatively easily achieved through the ‘tactical’ drafting of legislation.”

“Under EVEL, the backing of the UK-wide House remains necessary even if it is no longer sufficient for legislation to pass. This means that English MPs remain unable to force through legislation against the wishes of UK-wide MPs—a situation that in time may prove unacceptable to some MPs and wider English audiences.”

“This feature can be illuminated through reference to two different controversies that arose during the 2015–2017 parliament. In July 2015, the government laid before the Commons secondary legislation to relax the rules governing fox-hunting in England and Wales. But a scheduled vote to approve this change was abandoned after the Scottish National Party indicated that it would vote with Conservative backbenchers and others against the move, making a government defeat much more likely.”

“Subsequently, the provision to relax Sunday trading rules in England and Wales was deleted from the Enterprise Bill in a government defeat at Commons report stage. This policy achieved the backing of MPs in England and Wales, but it was MPs representing Scottish constituencies (where it would not directly have applied) who ultimately proved decisive”

“To clarify the extent to which EVEL does, and does not, answer the West Lothian anomaly on legislative voting, it is helpful to compare it to the devolved legislatures, and, specifically, to distinguish between two different ways in which these devolved bodies approve legislation in policy areas that are within their competence. The first, and most common, mechanism is for legislation to be introduced into the relevant devolved legislature, where it is scrutinised and voted on by representatives elected from that part of the UK. But an alternative mechanism that has been developed is for the legislation to be passed by the UK-level Westminster parliament, but with the expressed consent of the appropriate devolved legislature under the operation of the ‘Sewel convention’. EVEL has been designed to be, in some ways, analogous to the second of these mechanisms, but not the first. Consequently, English MPs remain unable to force through legislation against objections from non-English representatives and are thus in a ‘weaker’ position than their devolved counterparts."

“Moreover, legislative voting is only one component of parliamentary activity, and Dalyell’s query is also potentially relevant to these other functions. In the Westminster parliament, these include the opportunity to hold debates, question ministers and conduct formal inquiries—functions which are also mirrored within the devolved legislatures. These can be understood as mechanisms enabling the expression of ‘voice’, rather than simply the right to ‘veto’ proposed legislation. While these tools clearly can be, and are, used by English MPs at Westminster on policy matters that in practice relate only to England, they are not badged, or even acknowledged, as being territorially bounded in this way.

David Cameron, as quoted in the introduction above, argued that EVEL would enable England’s voice to be better heard within the UK legislature. Subsequently, his party’s 2015 English manifesto claimed that the reform would enable ‘English MPs to express their voice on matters affecting England only’ (Conservative Party, 2015, p. 8). Yet it is far from clear that EVEL offers any notable enhancement of the expressive and deliberative power of English MPs, or gives more voice to England in any meaningful sense.

More generally, there is a palpable sense that the newly established legislative grand committees have failed to provide a discernible English dimension to the legislative process or promote a clearer English voice.”

“During EVEL’s first year in operation, most of the legislative grand committees were entirely perfunctory, with few or no substantive contributions being made.”

“The failure of EVEL to facilitate any meaningful English voice also illustrates the dangers that can arise when different arguments for reform are conflated. There is a risk that ministers have ‘over-claimed’ in talking up what this kind of reform can achieve, and this could well lead to problems of expectation management in the future. As one MP opposed to the procedures told us, ‘any political advantage the government have got by doing this will be dissipated pretty quickly once people realise just how insignificant a measure it actually is. It just tackles one tiny part of the English Question.’”

“On the larger question of whether these procedures provide a meaningful form of English representation at Westminster, our research leads us to a more sceptical response. EVEL has not eliminated the basic territorial anomaly associated with legislative voting in the House of Commons, which has been exacerbated by devolution. Nor has this new system managed to provide a more visible kind of symbolic representation for the English. In this sense, despite the considerable energy expended on these changes and the inconvenience they have caused for parliament and government alike, it is not clear that they have fundamentally changed the rules of the legislative game along the lines anticipated by their supporters.”
Posted by Robin Tilbrook at 13:02