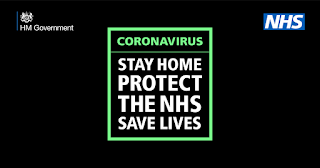 I didn't think much of the government's official response to our Judicial Review pre action protocol letter sent out to them on St George's day.
Their response letter is here >>> https://robintilbrook.blogspot.com/2020/05/government-response-to-our-lockdown.html
Here is my reply:-
Ms T H

Re:  English Democrats (Reg No. 6132268) and Robin Tilbrook – v – The Prime Minister and the Secretary of State Health and Social Care

Thank you for your letter of the 30th April.  We respond to your points numeratim as follows:-

We contend that a certification of “Totally Without Merit” (particularly in cases such as our client’s previous one where many lawyers, including eminent ones had already opined that the case was of strong merit) is a naked breach of basic rights to a fair hearing, going back to Magna Carta in England, and also under Article 6 in the European Convention of Human Rights.

3.       There is little point in referring to the “entirety of the United Kingdom” when the British Government and, in particular, the Secretary of State for Health, only has jurisdiction over Health in England.

As the example of Sweden shows, the British Government has by no means been “obliged” to act in the way that it has.  The way in which the Government has acted has probably not limited the spread of the virus, nor probably saved lives, albeit it is accepted that it has acted to “reduce the burden of the National Health Service”, but that is not a legal justification for its actions which are politically motivated and also in response to Mainstream Media hysteria. It has certainly crashed the English economy.

More generally on the issue of ultra vires we would respond as follows:-

Statutory Instruments are not primary legislation and therefore according to trite Law they cannot legally exceed the scope of the powers granted to Ministers under the primary legislation.  In this case this is the Public Health (Control of Disease) Act 1984.  This is an Act primarily focussed on controlling international trade and travel, particularly with reference to shipping and docks and, by extension, also airports and aerodromes.  There is no authority in this Act for a general Lockdown of the People of England, or for many of the businesses conducted by the People of England.

The Prime Minister is reported to have expressly refused to authorise regulations to control international travel as is reported here:-


The result, as has been reported in the Guardian (on 5.5.20) is that, in the period from 1st January 2020 to 23rd March 2020, the Government had permitted over 18 million international travellers to come into the United Kingdom unchecked and untested for Coronavirus, even from points of origin where there was known to be infection.

The Public Health (Control of Disease) Act 1984 would have permitted restrictions to such travellers, but as stated above, the Prime Minister expressly declined to take steps which were within the powers of the Act and thus of the Secretary of State.

The Government also did not take action under the Civil Contingencies Act 2004, nor under the Coronavirus Act 2020 which the Government rushed through Parliament duplicitously, claiming that it needed the powers urgently.

Within 12 hours of Royal Assent for this Act, the Secretary of State had promulgated his pre-prepared “Health Protection (Coronavirus, Restrictions) (England) Regulations 2020”, purportedly pursuant to the 1984 Act.

The Claimants will rely upon the natural meaning of The Public Health (Control of Disease) Act 1984, considered both literally and also purpositively


Regulations against individual persons or singular gatherings, not a


general Lockdown of the People of England.

The effect of permitting on-going mass international travel has undoubtedly been to vastly facilitate the spread of Coronavirus infection into the population of England.

If that was not enough, the Government, for the sake of the NHS, promulgated the regulation:- “Covid-19 Hospital Discharge Service Requirements” (here is the link to that regulation >>> https://assets.publishing.service.gov.uk/government/uploads/system/uploads/attachment_data/file/880288/COVID-19_hospital_discharge_service_requirements.pdf ).


Under this large numbers of elderly “bed-blockers”, whom NHS management had long wanted to get out of the hospitals, were transferred into Care Homes, paid for by Government funds.  This had the effect, which seems to have been in the contemplation of the drafters of this regulation, of spreading the Coronavirus infection widely within the Care Homes to which these hospital patients were sent.  Thus, no doubt, very considerably increasing the death toll in such homes.

The Government’s actions in “Locking Down” the general population of England whilst continuing to permit mass international travel and placing at risk the inmates of care homes and crashing the English economy, is in stark contrast to the careful and responsible response which the Swedish Government has adopted for Sweden.

It was also irresponsible, reckless and ultra vires for regulations to be issued for the purposes, not of controlling the disease itself, but instead of “saving the NHS”.

It is also noted that the status of the Coronavirus (AKA Covid-19) was reduced from  the status of a “High Consequence Infectious Disease” under the NHS guideline “High consequence infectious diseases (HCID)” published on the 19th March 2020. Further it is noted that the Advisory Committee on Dangerous Pathogens (ACDP) is also of the opinion that Covid-19 should no longer be classified as a HCID.

11.     Your point about the unpaid Costs Order is, with the greatest of respect, preposterous as an obstacle to bringing Judicial Review against different parties, on a different matter. We refer to 2 above.  The case quoted is also irrelevant.  The First Claimant is however prepared to pay the £2,755.99 which you refer to.  Please provide details of where and how to pay that and what reference to apply etc.

12.     With the greatest of respect it is obvious that political parties and corporations and individuals all have enough standing to challenge whether or not the Government has behaved with constitutional propriety within the powers given to them and, in accordance with the European Convention of Human Rights, by way of Judicial Review.  This is as opposed to bringing a claim for damages, which does of course require proof of loss. This is cogently expressed in Supperstone and Goudie - Judicial Review, published by Butterworths

13.     If the Regulations had been, as initially notified, restricted to a duration of three weeks (despite our case that they would still have been illegal), it would arguably not have been proportionate to bring Judicial Review proceedings to have them quashed.

In the light of the Government’s expressed intention to continue with these Regulations, it has become more and more important to bring this case.  In addition, it is noted that others are now feeling likewise and are also proposing to bring Judicial Review proceedings.  The primary requirement is, of course, as you well know, that the Judicial Review is brought within three months.

14.     With respect we cannot see how you can make such a claim as it is self-evident that the Restrictions in the Regulations include many interferences with the European Convention of Human Rights. E.g. Those Restrictions that would prevent gatherings of more than 2 people are disproportionate breaches of the fundamental rights and freedoms protected by Articles 5, 6, 9, 11 and 14 and by Articles 1 and 2 of Protocol 1 of the European Convention on Human Rights and Fundamental Freedoms.

15.     It is, with respect, obvious that the “Covid-19 Pandemic” is not unprecedented since there have been previous pandemics, including some much worse than the current situation.   To take one example, the Spanish Flu killed over 250,000 within the United Kingdom and over 50 million worldwide.  Yet there was no Lockdown and no Restrictions but, on the contrary, a General Election was held in December 1918, in the middle of that genuine pandemic.

16.     The Restrictions imposed by the Regulations had as their primary objective what is primarily a management measure regarding the running of NHS England.  As already explained, the Government’s actions have clearly not focussed just on the protection of public health.

20.     Whilst what we suggested in our previous letter is that it might be possible to agree regulations that would be lawful, our primary contention is, of course, that so far as the existing Regulations and Amended Regulations, Guidance and the Coronavirus Act 2020 are concerned, that they should all be quashed as being legally and constitutionally invalid.

22.     It is obvious that in fact any legal person or individual within England is also an interested party

More generally, we support and endorse the arguments put forward by Messrs Wedlake Bell in their letter to the Second Defendant dated the 30th April on behalf of their client Simon Dolan.

Please help us. Our appeal for support is here >>> https://www.englishdemocrats.party/lockdown?utm_campaign=lockdown0805&utm_medium=email&utm_source=englishdemocrats
Posted by Robin Tilbrook at 17:14