TRUE PATRIOTS SHOULD SUPPORT ANYONE VICTIMISED BY POLITICAL CORRECTNESS 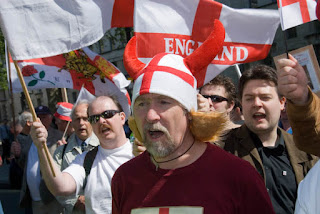 TRUE PATRIOTS SHOULD SUPPORT ANYONE VICTIMISED BY POLITICAL CORRECTNESS

Douglas Murray, who is a commentator who writes much good sense recently wrote the article below which is entitled “Will no one resist the new totalitarianism?” in which he quite rightly pointed out that we do need to stick up for all those being victimised as a result of politically correct witch-hunts.

One of the grave weaknesses on the “Right” of politics is the cowardly tendency to try and propitiate the Left by making all sorts of Politically Correct noises and generally attacking others on the right i.e. “punching right”.

There is also the absurdity of people on the Right saying that our side’s campaigners, lawyers, politicians, etc. should do all that they do for the love of country, free and unpaid.

The interesting thing here is of course that nobody on the Left seems to suggest that left-wing politics should be conducted free and unpaid.  Far from it they make sure that even turning up to demonstrations gets you paid.  The great financial engines for the Left are of course the established Trade Unions.  More recently they have increased their reach by their takeover of most of the big charities.

These attitudes have left the Right of politics mostly bitterly divided and short of money.  The only exception to this being the liberal globalists in the faux “Conservative” Party who focus any money received on their personal careers and self-interests rather than on anything that might help conservatism or patriotism.

I think what we need is more focus on creating organisations which can redress the balance.  Suggestions anyone?

Will no one resist the new totalitarianism?

I’ve been thinking a lot about totalitarianism recently. It’s unsettling, for as I do so, I notice its seedlings in every day life. And these are the same seedlings which, in the past, grew into horrible, magnified obscenities in totalitarian societies.

In particular, I’ve been considering two haunting observations made by Aleksandr Solzhenitsyn at the outset of The Gulag Archipelago. The first is the question of why people did not resist more when they were taken away in the night. Why did they not scream, tear up the earth, scratch the eyes of the men who had come to take them? And — if they had to leave their home – why didn’t they make sure that the people who had come into their home bore the scars of having done so for the rest of their days? Why did the captured even tip-toe down the stairs, as they were asked to do by their captors, in order not to disturb their neighbours?

The answer to this lies in a question. As Solzhenitsyn puts it: “At what exact point, then, should one resist? When one’s belt is taken away? When one is ordered to face into a corner?” In part, the reason nobody resists is the same one we learned from Communism’s evil twin: if people have no conception of what is about to happen to them, then they will do whatever they think is needed to keep themselves alive to the next stage.

When people were rounded up, they still hoped that this was the beginning of a process which would be resolved or righted at some point: that the misunderstanding would cleared up, or that the indignities could not get any worse. Until the whole world knew about what could happen, almost nobody imagined the end they would endure.

Solzhenitsyn relates the tale of one woman in the Twenties, early in the reign of communism in Russia, who was supposed to have been seized in a Moscow street. But she started screaming and fighting, and such was the commotion in the middle of a crowd, that the men assigned to take her away abandoned their task. But even her imagination of what was possible turned out to be limited. For she returned home that evening — which allowed the men to take her away privately, in the middle of the night, and send her to Lubyanka.

Solzhenitsyn’s second question-observation is even more haunting: why did people not intervene more to stop their friends, family or simply fellow-citizens from being taken away? In some ways, this is the more disturbing observation. We may grant that people have the best perspective on their own fate and will know best what might save themselves. But when people see women being plucked off the pavement by agents of the state, why do they continue walking?
Solzhenitsyn approaches this question through a bitter counterfactual. “How we burned in the camps later”, he says, thinking how different things might have been if the security operative who went out in the night to make arrests hadn’t known he would ever return to his family again. What if he hadn’t known whether he would return alive. What if, during the mass arrests in Leningrad, when one quarter of the city was arrested, people had lain in wait and attacked the people who had come to arrest them and their neighbours? What if they had waited on the staircase with “axes, hammers, pokers, or whatever else was at hand”?

You might say that not everybody is given to physical violence or physical courage.  Why, then – and in some ways this is the worse question – weren’t the tires of all those Black Maria sitting with a solitary driver (waiting for the human cargo to be brought out of the building, into the vehicle and from there away) spiked? How is it that a whole public with such a cause (their relatives and friends being taken away in front of their eyes) couldn’t do what hoodlums easily manage with no motivation whatsoever?

It was, says Solzhenitsyn,  because the people “didn’t love freedom enough. And even more — we had no awareness of the real situation.”
It may seem strange, and even slightly obscene, to make a leap from the worst days of the 20th century to the seemingly incomparable situation in developed democracies today. But the behaviour of people under totalitarianism is, I think, recognisable today in the normal behaviour of normal people in our supposedly normal times.

In a culture which is often described as a ‘cancel culture’ — one in which people are liable to be rendered at least unemployable at any given moment — these behaviours manifest themselves still. Anyone who doubts this should read this piece by Mike Tunison on Medium. As Tunison says, he was one of the men whose name was — wholly wrongly — put on a list published online in October 2017 purporting to list around 70 men in the media described by the author as ‘Shitty Media Men’. The document was an anonymous list of unvetted, unchecked claims about dozens of men in the media in America whom the author or authors claimed to have a reputation for being sinister or violent towards women.

The list did the feverish rounds of the internet in the same way that similar lists did in the UK and elsewhere. The media was high on the octane of exposes. Having been silent about cases of real abuse, nobody had time or interest in questioning documents like the list that Tunison was on. And so, with no apparent justification, other than the misfortune of his having crossed the path of someone with a grudge, Tunison’s life was turned upside down. He was made unemployable in the career to which he had chosen to dedicate his life. Jobs he did apply to could see the claims made against him online and step silently away. Finally, last year, he landed a job as a janitor. Is no one interested in this or the injustice it screams?

A similar scenario will doubtless emerge in the UK, with the dismissal of the broadcaster Alastair Stewart after decades of work for ITV. On the basis of a quotation from Shakespeare, which one person online claimed was clear, cloaked racism, a career of decades is over.

Some of Stewart’s friends will fight for him, perhaps. Others will look away, sufficiently worried about the implications of even being ‘adjacent’ to someone accused of racism. But is nobody interested in the means by which this was done?  Consider the implications of the phrase I wrote above. A case of clear, cloaked racism.  So clear as to deserve the end of somebody’s career. Yet done ‘with the cover’ of a quotation. Meaning that the crime which is so clear, so blazing and so self-evident is also only in the eye of the beholder, only discernible to a particular eye. In other words, not remotely clear.
The people who suffer these injustices tend not to come out fighting, screaming and scratching their way back to safety. They tend — like Tunison – to submit to the madness which has washed over them, partly in the hope that they will some day claw their way back. It’s hard to grasp, at the time, that this is it and that they need to fight for everything. Who would believe that a life could be destroyed, every personal relationship shaken or ended, because of an anonymous list published online?

In the same way, when a nationally famous figure is accused of the great crime of the age, they rarely believe that the people for whom they have worked for for decades — the people they gave up their weekends for, their spare evenings, the times they could have been with their family for — would drop them in a matter of hours for a crime which cannot be explained and whose nature is wholly subjective. For that would mean everybody in the world would be able to take out anybody else, if they had sufficient desire to do so. And surely that world would be unworkable.

Well it would be, and it is. But it is possible not only because the victims do not quell and shake and scream enough but because we – the public – allow them to disappear one by one. We do not slash the virtual tires of those who take them away. We do not pick up whatever cudgels we have to hand to beat back their accusers. We just sit, as the anonymous lists and the unprovable complaints pile up and up, simply hoping all the time that the dishonest players and anonymous accusers will never come for us.

If people want to understand why totalitarianism works, the seedlings are all around us.