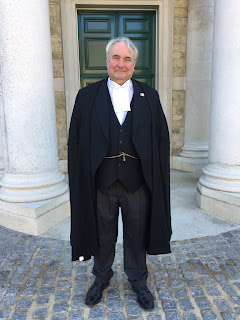 
Since issuing the English Democrats’ case (claiming a Declaration that the UK left the EU on the expiry of our Notice on the 29th March 2019), the Administrative Court has not shown itself to be either as speedy or efficient at dealing with the case.

This is despite my having made an initial Application to have the case expedited. This resulted in the Government Legal Department undertaking to provide their Grounds of Resistance by just before Easter on the 17th April  (usually they get a full 21 days).  Mr Justice Supperstone made an Order which was emailed to me confirming that in these circumstances he was not going to order the Government Legal Department to serve their Grounds of Resistance any sooner.

Matters then did not progress as speedily as we would all have hoped.  So I then made a further Application for the case to be expedited, but received no indication as to when any hearing was going to occur.  So after waiting for almost another two months I went off on holiday for two weeks starting on the evening of Friday, 14th June.

Until Tuesday, 25th June we had heard nothing further from the Court.  Although I am sole practitioner and most sole practitioners going on holiday simply close their office, I do have my assistant come in to check the post regularly and, of course, to answer any telephone calls, etc.

I was therefore dismayed to hear that a decision had been made, the image of which I am showing on this blog, not only refusing to give Permission, which would be strange enough, given Sir Richard Aitkin’s, the retired Court of Appeal Judge’s public comment that this case is “strongly arguable”, which is well above the merely “arguable” threshold that is supposed to guarantee permission to Judicially Review.  But this Order went much further than that and certified on the flimsiest of grounds that our case was “Totally Without Merit”. This is a shorthand for a new procedure introduced in order to make things as difficult as possible for immigration cases, where the Administrative Court has been inundated with legally unmeritorious applications by litigants in person.

If a case is certified as being Totally Without Merit, then the consequence is that an application to Appeal to the Court of Appeal has to be made within 7 days of deemed service.

As you can see from the Court’s covering letter, the letter was purportedly sent out on Wednesday, 19th June and therefore deemed served on Friday, 21st.  In fact it had not arrived on Friday, 21st as my post was fully opened on that day.

It is possible that it arrived on the 22nd or on Monday, 24th, as it was opened when my assistant next went into the office on Tuesday, 25th.

To catch me out it needed me to go away for two weeks or more.  This holiday was the first time that I have done so for over 20 years!

The Order was then faxed that morning to our barrister, Francis Hoar, and work commenced to get this Application issued on or before the last date for issuing it, which was Friday, 28th.

Francis did a superb job and got the Application ready for us to be able to issue it, despite my still being away on holiday.

If my personal practice had not been as thorough and as conscientious as it is, I think it is likely that I would have returned from holiday to find that we had already missed the deadline.

Whenever I think about this situation I find it hard to believe that this “coincidence” is purely accidental.  This was the one opportunity in the whole of the last two months in which we could lose this case provided the paperwork was sent when it was, as explained above.

Furthermore it is odd that the less important Order of Mr Justice Supperstone’s was emailed but this much more important Order was only posted. Nor were we given any advance warning.  I do not think I will ever be able to prove the attempted set up that seems to have happened here, but fortunately we have managed to keep the case on track by getting the Application in on time.

If my suspicions are right it is a very sad reflection on the state of “justice” in this country which has now become so politicised that we seem to have lost the “Rule of Law” which was the cornerstone of England’s hard won and hard fought ancient Constitution.

A further matter emerged when there was the easily made confusion between two Mr Justice Spencers.  The signature on the Order looks like Mr Justice Martin Spencer, but it turns out on very close inspection of the documentation to be that of Mr Justice Robin Spencer aka Sir Robin Spencer.

Inspection of the Facebook profile and Twitter account of Mr Justice Martin Spencer revealed that he was an outspoken Remainer. As it was put in a legal analysis:-

18. On the said Twitter site appear the following comments by Mr Spencer QC (as he then was) (all dated 24.6.2016, the day the referendum result was announced), none of which have since been removed, all of which were publicly available on 27.6.2019 and all of which continued to be published by Martin Spencer J up to the later date.  In chronological order:

(1)       ‘If Europe disintegrates, with the UK as the catalyst, we will have betrayed our children and grandchildren.’
(2)       This is not something we can undo in 3 or 4 years’ time as in a general election, it will affect generations.’
(3)       We have taken leave of our senses, as a country.  This was a time to stand together, untied with Europe in our beliefs and values.’

19.       The implied meaning of the above tweets includes the statements that (in respect of each numbered tweet using the same sub-paragraphs) those voting and those political parties advocating Leave in the referendum:

(1)       Are responsible:
(a)       for betraying their children and grandchildren;
(b)       for increasing the likelihood of the ‘disintegration’ of Europe;
(2)       Have damaged the UK for generations (this is imputed from the fact that the second comment immediately followed the first); and
(3)       Have, in particular, ‘taken leave of [their] senses’ and have betrayed the values that all should share.

21.       On 6.7.2016, on the said FB site, the user (it is assumed Mr Spencer QC, as he then was) made the following comment, which remained publicly available to view and thereby published on 27.6.2019:
‘Apparently, since the referendum vote, support for staying in the EU has risen in Denmark from 59.8 % to 69 %.  We appear to be a laughing stock in the rest of Europe.  This is Der Spiegel’s verdict: ‘the result has "created new rifts: between old and young, London and the provinces, the English and the Scottish. In the end, further referenda may follow, with the result that the once-powerful UK could be transformed into a loose alliance of marginalised mini-states." Quite.’

22.       The implied meaning of the above comment was that those voting Leave or advocating such a vote have:
(1)       Made the UK the laughing stock of Europe;
(2)       Been responsible for creating the rifts set out;
(3)       Increased the likelihood of the break-up of the UK into a loose alliance of marginalised mini-states, including England as an independent country;
And that:
(4)       The emergence of England as an independent country would be an extremely negative outcome, were it ever to occur.

23.       In respect of the implied meaning alleged at para 17 (3) above, the author reaches the conclusion that the break-up of the UK would be caused by rifts between (inter alia) England and Scotland; and went on to allege the emergence of ‘mini-states’.  Although England has a population of around 55 million, the most logical meaning of this other to an ‘idiot in a hurry’, informed by the well-known fact that England voted Leave and Scotland did not, was that England would be one of those states.

24.       The FB user, who appears to have been Mr Spencer QC (as he then was) also advertised the fact that he had signed an online Petition that said as follows:

‘We the undersigned call upon HM Government to implement a rule that if the remain or leave vote is less than 60% based a turnout less than 75% there should be another referendum.’

25.       The implied meaning of the above statement, which (if the site is his) Mr Spencer QC endorsed and which, in his judicial office, he continues to endorse through its publication, is that the Referendum result, in which under 60 % of the population on a turnout under 75 % voted to Leave, was illegitimate and that the UK should therefore remain in the EU in spite of the Referendum result.

Although these comments cannot have any bearing on this case, they do however have a strong bearing on what is happening to our legal system in which we have a Blairite Judicial Appointments Commission which will only appoint Judges who can “demonstrate a life time’s commitment to Equality and Diversity” and are therefore ideologically only of the multiculturalist Left and therefore almost all Remainers.

This system of appointment clearly needs to be changed to ensure that people are only appointed as Judges as they are the best lawyers and their politics is ignored.  If the British Political Establishment are displaced then we can expect the terms of reference to the Judicial Appointments Commission to be changed after each General Election and appointments to be made only of those who are supporters of whichever party is then in power!