How the Lord Mayor of London undermines Liberalism! 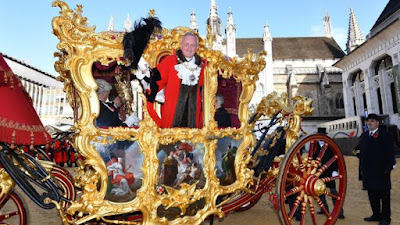 What the Lord Mayor of London teaches us about Liberal theory!

How the Lord Mayor of London undermines Liberalism!

Liberal theory, from John Stuart Mill onwards (and especially in the modern era of ‘Neo-Liberalism’) is based upon the idea that all people are fundamentally the same.  In particular, that everyone’s fundamental nature is to maximise their position in the market-place, as economists put it.  This is the theory that human-beings are “rational economic actors” whose only motivation is to improve their personal position in economic terms - like good economic worker ants!

I believe this theory to be fundamentally wrong and to be a fundamental misunderstanding of human nature.

I also believe that this error is important in explaining many of the problems of our country today because it is an error that permeates the thinking of the elite in our society. That is not only the rich elite, but also the political elite, the media elite and the decision-making elite in universities and in most of the key positions of power and influence in our State and in our country.

This error has led the key policy decision-makers in our society to disregard and disrespect the natural urges of most of our people.

I started this with headings relating to the Lord Mayor of London.  Above there is a picture of him in all his refinery!  You might ask what is the link?  I think it is this. The Lord Mayoralty of the City of London is the supreme English example of what rich people will do and how far they will go for Status and for Respect within our traditional communities..

In order to be Lord Mayor you have to give up many hours to unpaid work and activity within the City of London Corporation as an Alderman and as a Sherriff.  There is also a three year stretch, in the run-up to and in the year of being Lord Mayor, in which you have no time for any paid work.  During this time you would have to be fully focussed on your ceremonial roles in the City of London hierarchy.  Also even when in office as Lord Mayor, you will have virtually no real power, nor will any of it will gain you any economic advantage.  Indeed a generally held estimate for the cost of being Lord Mayor is that it costs at least £500,000!

In "Liberal" theory of course all this activity is completely irrational.  In fact, so irrational as to be almost utterly inexplicable.

This of course vividly demonstrates that ‘Liberal’ theory is wildly adrift from the reality of human nature because in fact rich people getting involved in such activities are perfectly rationally focussed on the acquisition of status and respect within our traditional communities.

Across the Nation many other people chose other ways of getting such communal status and respect. For example in most English counties there is an equivalent office of High Sherriff.  Also there is the whole “Honours System” in which many people struggle to get OBEs or Knighthoods, etc.

The oddity is that rich people do not understand that their own urges for status and respect and community are perfectly normal not only for them, but also for everybody else as well!

Therefore the same rich people are very often perfectly happy to justify low paid, low status and insecure jobs for “ordinary people” and they try to justify this hypocracy using ‘Liberal’ economic arguments.  Such people really should not be as surprised as they apparently are when most of our people don’t like the outcome!

We need a new politics with a new economic model which does give proper status and respect to our own people in our own most natural and very traditional community, namely our Nation, I mean those people who do all the “ordinary” jobs which are nevertheless, of course, so very necessary to the proper functioning of our society and to our collective English culture and prosperity.

My New Year message therefore is that we English Nationalists need to focus more on reforms that give English People a justified pride and self-respect as citizens, and as fellow members of our Nation, as well as a fair reward for fair labour.  Also we should focus on attacking the dogma on “economic efficiency” which currently excessively rewards big business and bankers and ‘Liberal’ British Establishment politicians!