Some coverage of the Clacton campaign 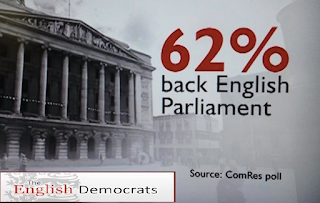 As a candidate in Clacton I was contacted by the local paper:-

The Daily Gazette will be running a series of ‘big questions’ over the next three weeks, which will see all candidates asked to give 200-word answers to each of three questions.
For the Clacton seat, your answers will be published on May 17, May 24 and May 30.

The first question is:
How did you vote in the EU referendum? Do you stick by that decision? And why?


"I campaigned and voted for Leaving the EU and I am delighted by the result and the shockwaves that it has sent through the British Establishment. The next big issue is the "English Question".
That's the rights and interests of the English to be fairly treated!"
That was published on 16th May 2017 with this article:-

A SELF-DECLARED Little Englander is campaigning for Clacton to have the UK’s biggest St George’s Day Party.

Solicitor Robin Tilbrook, 59, from Ongar, will be standing for the Clacton seat in the upcoming General Election.

Mr Tilbrook, leader and chairman of the English Democrats, is hoping former Ukip voters will turn to his party.

He said: “We have been campaigning for quite a long time on the ticket of trying to get an English parliament, first minister and government within a federal UK.


“The union of the UK costs us much more money as English people than the EU ever did.

“A House of Lords committee looking at the Barnett Formula in 2009 reported that the union costs us £49billion a year, which is what England subsidises Northern Ireland, Wales and Scotland every year.

“There are some very serious issues that need to be addressed in Clacton and properly funded by Government, whether that is health, mental health or infrastructure.

“It is all down to where the money goes.

“The Government spends far less per every man woman and child in England than they do in Scotland.”

Mr Tilbrook said a fairly-funded England could afford to fund crime prevention and to fund health services, including an increase in doctors and to maintain Clacton Hospital’s minor injuries service.

He added: “In terms of uplifting things, we would pledge for Clacton to have the biggest St George’s Day celebration in England.”
(Here is a link to the original >>> http://www.clactonandfrintongazette.co.uk/news/15289602._Little_Englander___anti_knife_campaigner_and_finance_graduate_fight_to_be_MP/)
Posted by Robin Tilbrook at 10:57