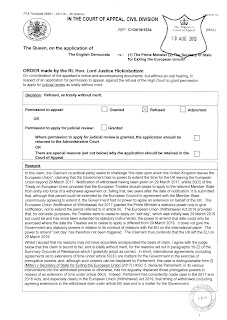 The Right Honourable Lord Justice Hickinbottom has dismissed our Application to Appeal to the Court of Appeal and has used the device of “Totally without Merit” to prevent us from demanding a hearing of our Application.

Given that this is a case that very many lawyers, both distinguished and retired members of the judiciary, QCs, barristers and solicitors think has strong legal credibility, this decision can only be based upon the Judge’s politics.
In the English and Welsh Jurisdiction these days a Judge’s politics perhaps should not be a surprise, given the blatant bias in the appointments system introduced under Blair by his last proper Lord Chancellor, Lord Derry Irvine, who created the Judicial Appointments Commission publicly boasting that he had created a system which would not allow the appointment of any Judges who had “Reactionary Views”.
The Judicial Appointments Commission requires all Judges to prove that they have “a life-time’s commitment to Equality and Diversity”.  Lord Justice Hickinbottom has this in spades, as it says on his biography published on the Judicial website which says he is:- “the former Senior Liaison Judge for Diversity”.
Also Lord Justice Hickinbottom is a Fellow of the European Law Institute.  The first among ELI’s core objections is:- “To evaluate and stimulate the development of EU law, legal policy, and practice, and in particular make proposals for the further development of the acquis and for the enhancement of EU law implementation by the Member States.”
So it is perhaps not a surprise that a Judge with such views would be more a Europhile Left-wing political activist than someone who would judge simply according to law.
Such is my explanation of why we have had this decision go against us.
The reasoning behind a claim that the case was ‘Totally without Merit’ is not about an actual finding of fact, since as our QC made clear, it was blatantly obviously that the first Judge had actually got his decision wrong and therefore our Application to Appeal clearly had substantial merit.
No, this decision is not about the genuine merits of the case, it is about preventing this case from being heard, which the device of ‘Totally without Merit’ achieves, as I explained in a previous blog.
I think the only sensible reaction to this is to make an Application to the European Convention of Human Rights Court, based in Strasbourg.  This is of course not the EU Court, but a court that will look at whether or not these decisions to exclude our case from even getting a hearing is simply on the political orientation of the Judiciary and is a breach of Article 6 of the European Convention of Human Rights which states:-
"In the determination of his civil rights....everyone is entitled to a fair and public hearing within a reasonable time by an...impartial tribunal"
Another interesting questions is why Lord Justice Hickinbottom was chosen by the Civil Service to hear the case?
I think Jacob Rees-Mogg rather gave the game away when he was asked about the case.  He made clear that he did not want it to succeed.  Maybe that is also true of the Prime Minister, Boris Johnson.  If so that would simply be a demonstration that both of them are much more concerned about the Conservative Party in “getting Brexit done” than about the interests of our country in how it is done.
The worrying element of that thought is that it means that they will be quite open to agreeing completely unacceptable surrender terms to the EU in some sort of Withdrawal Agreement.
Boris’ Ministry of Justice did of course have the opportunity to influence which Judge got to look at these papers and what steer that that Judge was probably given as to the outcome that was desired.
Let’s see now if the European Court of Human Rights considers that the politicised way that the High Court and the Court of Appeal operate is in breach of the European Convention of Human Rights!
I think it is a sad reflection on the state of our country in which we have allowed Leftist social justice warriors to dictate the agenda, not only in politics and in the media, but also in the court system.  A court system which used to be renowned for its impartial and incorruptible justice!
What do you think?
Posted by Robin Tilbrook at 20:14